Piranhas have long inspired many emotions in humane beings, everything from fascination to outright fear. It is not uncommon then for many people to view them as endurable and undaunted predators.

However, despite this reputation, piranhas are helpless against the assaults of humans.
Every year, countless numbers of piranhas are unwillingly captured and kidnapped from their natural habitat so they can be exploited and commercialized for monetary gain. David M. Schleser's Piranhas (Barron's Educational Series, Inc.1997) states that humans are undoubtedly the major predators of adult piranhas.

It is a common misconception that fish do not feel pain. This belief has allowed many people to justify the cruelty they inflict upon piranhas (and many other fish species). However, fish can and do feel pain and recent studies have provided the scientific evidence to prove this. A study done by Joseph Garner of Purdue University (2009) reported that these animals do experience pain consciously, rather than simply reacting with a reflex. Many other studies have resulted in similar evidence.

The ability of fish to perceive pain and discomfort makes the bid for their welfare extremely important. The desecration and ill-treatment that piranhas endure as a result of the trades that harvest and profit from them is truly horrifying.

Piranhas are hunted extensively throughout their range and then sold to local food markets. Considerable numbers are intentionally caught in nets, traps and by hooks and lines. However, numerous other piranhas are accidentally caught in lines and traps set for other intended catch.

Piranhas are also harvested directly from the wild to be sent off to the exotic pet trade. This harvesting represents an unnatural loss in the populations. Piranhas are caught from their native South America and then exported to places all around the world.

Others are killed so that they can be dried and mounted, or encased in glass. These deceased piranhas are then sold as decorative ornaments and marketed towards tourists.

The piranhas' fearsome reputation makes them susceptible to being directly persecuted by those who deem them as dangerous or nuisance. Individuals who encounter vulnerable piranhas are likely to kill them. This is especially true of piranhas who have become trapped in receding pools after the wet season. Piranhas are also fished and killed for sport. The reputation of piranhas as blood-thirsty killers often makes them the pursuit of outdoors men who want to prove their masculinity by targeting such animals.

Protecting piranhas is important for several reasons. Piranhas are absolutely paramount to the health of many eco-systems and to biodiversity as they are extremely valuable components to the ecological communities in which they live; playing several complex roles.

Piranhas are efficient predators in both lotic and lentic habitats. Piranhas largely prey upon sick, injured, dyeing, or deceased animals. By effectively removing sick or dying members from animal populations, piranhas help maintain the health of the aquatic eco-systems they reside in. They essentially act as a natural clean-up crew.

Aside from their predatory and scavenging roles, piranhas are also prey items for numerous other species including caimans, birds, otters, and dolphins.

There is much about piranhas that scientists still do not know. This fact could mean that piranhas may play even more integral roles in the natural world that we are simply unaware of.

Many individuals have a thought process that views human beings as the most intelligent, superior, and enlightened lifeforms on the planet. If people are to have such views of themselves then they must use such intelligence and perception to realize that the majority of treatment that piranhas (and all other animals for that matter) receive from humans is extremely unethical and deplorable.

Humans must use their privileged position to strive to live in such a manner that is not detrimental or cruel to the other species on the earth; many of which species have been here for millions of years before humans appeared. This gives non-human species every right (if not more then humans do) to live on this planet. It also gives them the right to live free of cruelty, persecution, and from infringements on their freedom.

Protecting piranhas is also important to furthering the animal rights movement. Being a compassionate animal rights advocate means standing up for all animals, not just the visually appealing (cute and cuddly) ones such as charismatic mammals. If individuals can be taught the value in protecting and conserving an animal like a piranha (a so called "terrifying cold-blooded fish"), then they will certainly be able to see the value in all other animals as well! 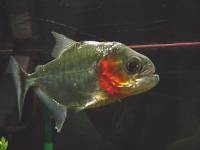