For its mistreatment of animals circus Gärtner wasn't welcome in Austria and Germany even before the legal ban of circuses with animal acts which came into force in Austria on January 1, 2005. Mister Gärtner sr. was known as the most brutal and the cruelest trainer of elephants in Europe. He said that "you should take out elephant's right eye, because that way you can hit him better on that side." Furthermore, one member of the Gärtner family was killed by an elephant.

Brutalities to animals and their mistreatment in this Austrian circus, which is now registered as Croatian circus, filled the lines of newspapers many times.

Gärtner was involved in a scandal concerning elephants from Brijuni which happened in 2002. On that occasion, Anton Gärtner, who was introduced as transporter-seller of the elephants, tortured and abused Sony and Lanka which he "bought" from the national park despite the prohibition ordered by the veterinary inspection. He kept one elephant chained in the back of the truck. The elephant wasn't able to lie down or sit, and wasn't even getting food and water regularly. As she was separated from the male, the female elephant was banging her head against the iron bars and refused to eat. Reporters and the representatives of Osjecki zeleni association, society "Life", Alliance of Germans and Austrians in Croatia from Osijek, Organization "Capica" from Rijeka, organization "Lunjo i Maza" from Lovran and Committee for Human Rights from Porec started off a campaign for salvation of these elephants and succeeded. When they came to see the elephants on August 8, 2000, they were shocked: Lanka and Sony were placed in two separate crates. It was darkened, moistened, with bare concrete floor and with no food or water.

When we asked for their immediate release, we were told that the elephants were aggressive and dangerous. Lie! Tortured elephants were turning their heads to us, and when Sony turned his right side everyone was shocked! There was a 60 cm wound on his right ear and one above his right eye, and a 20 cm bruise. Marks of beating were all over his head, especially two big ones on his forehead. There were more wounds on his right leg... We managed to get copies of the trade contract for the elephants and all had different remarks, different sums of money and different data about the animal age. All fakes. After being beaten and tortured throughout July, male Sony was already boarded on the truck of Anton Gärtner whose true attentions were never quite clear – from slaughterhouses to circus tents. Felony court in Pula fined Anton Gärtner with 19,000 kn for abuse of elephant and violation of Animal Welfare Act.

The Nature Protection Directorate in Djakovo inspected the premises of Circus Gärtner on July 17, 2004. Its report, signed by the senior inspector for nature protection, Zeljko Vukovic, revealed that the circus, as a corporation owned by Franjo Gärtner, owns 37 animals belonging to ten wild and highly protected species: two blue and yellow macaws (Ara ararauna), two Asian elephants (Elephas maximus), three ostriches (Struthio camelus), one rhesus monkey (Macaca mulatta), six guanacos (Lama guanicoe), five Indian pytons (Pytono molorus), two Nile crocodiles (Crocodylus niloticus), one alligator (Alligator ssp.), five Hermann's tortoises (Testudo hermanni), and ten African spurred tortoises (Geochelone sulcata). Contrary to the Convention on International Trade in Endangered Species of Wild Fauna and Flora, it was established that Circus Gärtner possesses only export permits for the above-mentioned animals (except for the African spurred tortoises and the Hermann's tortoises), which were issued by the relevant office in the Republic of Bulgaria, exclusively for export purposes, and had expired by the time of the inspection. Moreover, it was discovered that the circus also possesses two protected genus of tortoise, namely the Hermann's tortoise and the African spurred tortoise, for which it does not possess the necessary documentation. Both are listed by the CITES, Appendix II. Since the Law on Nature Protection which was valid at that time did not authorise any court to pursue charges raised for violating its positive regulations, the above-mentioned inspection was not able to raise charges in the case described. However, Gärtner was presented with a formal decision, in which he was instructed to inform the ministry in charge about the presence of protected species on its premises and apply for a permit to keep them with the purpose of presentation to the public and trade.

Furthermore, the inspectors in charge of controlling Circus Gärtner established that it obtained several animals from the Zoological Garden of Osijek during its stay in that town early in July 2004 (one guanaco – Lama guanicoe, one Scottish ox, one Burchell zebra – Equus burchelli, and two antelopes – Taurotragus oryx). During the inspection, it was not mentioned whether the circus gave some animals in return. However, the subsequent inspection in the Zoological Garden of Osijek established that the circus had given three snakes in exchange (two boa constrictors – Boa constrictor and one Burmese albino python – Python molorus bivittatus) on July 10, 2004.

Animal Friends organized many peaceful demonstrations, with special caution because of already well known aggression of Gärtner. Despite all of this, Gärtner again demonstrated its primitivism and aggression. Every demo resulted with verbal insults and threats and they did not stop at that. In Krizevci they threw stones at the activists so police had to intervene, and during a demo in Dugo Selo one of the circus employees physically attacked one of the female activists and earned a police report. On the same occasion, the circus employee got into a fight with a member of the City council, continued with insults and said that "women too must be beaten if they disobey." The same thing happened in Umag in January 2005, when circus employees took away a camera of activists of UPS! what is called a hiding of evidences in the court of law. They returned the camera because police forced them to, but they kept the tape. They threatened to damage an activist's car, and one circus employee attacked an activist and broke his nose. We must point out that Gärtner is mentioned in the case of murder of Branko Bijelic (Novi list, September 23, 2004). When the circus was in Zadar, circus men again insulted the protesters and even threatened that they'll break a neck to an activist. Furthermore, people of Gärtner circus several times called the head office of Animal Friends Croatia in Zagreb and again insulted and threatened. During a demo in Velika Gorica in November 2004, we saw animals like camels and zebras, which are used to much warmer climate, lying down on freezing ground, and a buffalo that went insane because of captivity and "circus life" and constantly repeated the same move what is typical behavior of animals which suffer long term captivity.

When Gärtner left Buzet, locals found a dead python in river Mirna which is allegedly a circus python, because noone in that area owned a python, and it was found right after the circus left. (Glas Istre, January 25, 2005). We also found out that during its stay in Buzet a crocodile escaped from the circus, but, luckily, it was returned back on the same day (Novi List, January 25, 2005).

Town Vrsar did not allow a location permit for circus tents, because people of Vrsar refused to welcome them because of the case of mistreatment of elephants from Brijuni. In Dugo Selo Gärtner earned a report by the veterinary inspection for violating the Veterinary Act, and in Porec inspectors found five animals for which circus didn't have all appropriate documents (Glas Istre, January 27, 2005). According to Article 24 of Animal Welfare Act, circus shows involving animals can be performed if they get a license which is issued by the responsible veterinary authority of the municipality and is based on the documentation of the origin and health of the animals. Circus shows with animals can be held 7 days from the day they get a license.

In spite of the fact that the island of Vir doesn't have running water, that is water supply system, circus Gärtner had no problem to visit it and perform there for three weeks during August 2005, holding 40 animal species on a very cramped space without a shadow and a single tree, thus shocking both the inhabitants on the island and the tourists. The inhabitants also reported to the media the case of a runaway buffalo that jeopardized the safety of the people on the island. The workers in the circus Gärtner were also well aware of that, for they warned the inhabitants to stay away from the buffalo because of its aggression. The natives could see that by themselves while watching the frightened buffalo injuring one of the workers who was catching it. Also, the workers were seen when feeding the wild animals with live rabbits. During their protest on August 18, 2005, the AFC activists noticed that the elephants were confined to a small and stinking truck trailers full of dung and that they were showing the heavy mental instabilities by their repetitive moves. 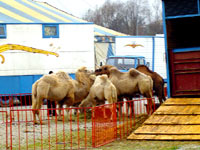 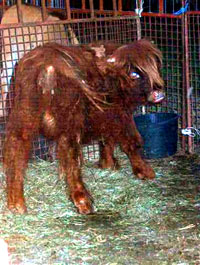 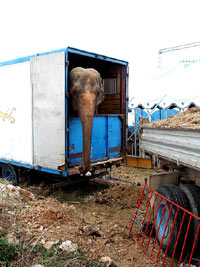 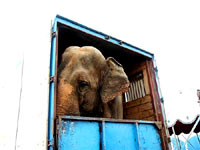