Animal Friends, Blue World, Morigenos, along with the general public in Croatia will join thousands of protesters from around 60 societies and organisations from over 30 countries around the world who will raise their voice against the massacre of dolphins, and direct an apeal to Japanese authorities, media and, primarily, the people of Japan to prevent this massacre.

The protest on the Japanese Dolphin Day, as this international campaign is called, will be held in Zagreb, October 8, 2005, in front of the Japanese Embassy in Ulica J. R. Boskovica 2, starting at 12 noon.

Every year, over 20,000 dolphins (bottlenose dolphins, striped dolphins, melon-headed whales, pilot whales, false killer whales, orcas, etc.) are killed during various types of whaling in Japan (fishing with nets, manual harpoons and crossbows). During that so-called "small-scale coastal whaling" over 400,000 dolphins were killed in the past 20 years in Japanese territorial waters.

Probably one of the bloodiest and most horrific massacres of dolphins occurs while fishing with nets. Groups of dolphins are forced with boats towards small coves after which the coves are enclosed by nets and the dolphins dragged into a shallow spot where they are killed with knives or machetes and left to bleed to death or they are, still alive and injured, dragged onto the beach where they are carved up and thrown into trucks. The hunting goes on for days, and the sea and coast turn into a blood-bath.

The reason for continuing this kind of hunting and killing of dolphins is, as fishermen say "the destruction of pests, because dolphins eat too many fish." Besides human food, dolphins are also used for the production of food for companion animals and fertilizer. What is particularly concerning is the increasingly common practice of selling a certain number of animals to be kept in aquariums and marine amusement parks.

Although it may seem to us that events like these belong to the past, this kind of practice continues even today, despite numerous protests against the killing of dolphins and the destruction of the environment in which they live. One of the reasons is that the Japanese government permits whaling. Therefore, numerous organizations and societies united with the organizers of the public protest, One Voice from France, International Marine Mammal Project from the USA and Elsa Nature Conservancy from Japan with the aim of stopping the massacre of dolphins in Japan and an international protest against the hunting and deliberate killing of dolphins and small whales in Japan is organised October 8, 2005.

If you cannot attend the protest, please send a short letter to the Japanese Embassy in Zagreb, in which you request that they pass on your protest against the hunting and killing of whales and dolphins to their Government, to the following address: Japanese Embassy, Josipa Rudera Boskovica 2, 10000 Zagreb, Croatia.

For the duration of the protest, a new version of the educative DVD "Welcome to Taiji" will be available to those interested and to representatives of the media. 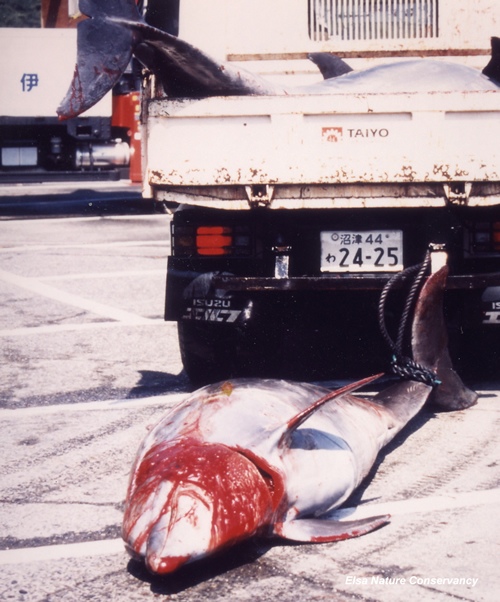 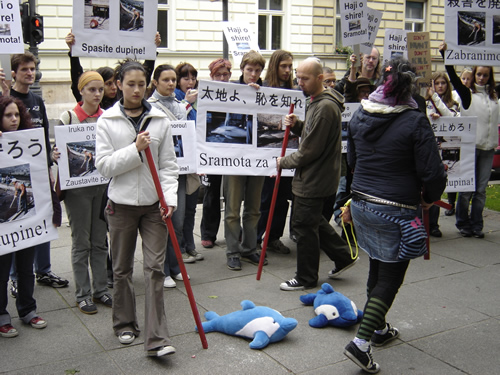 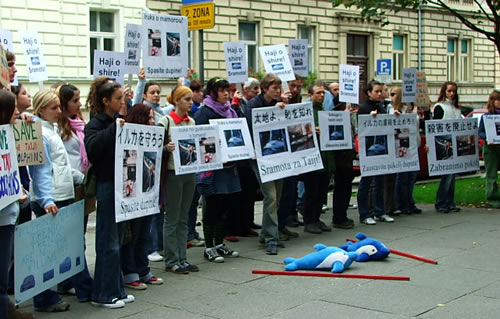 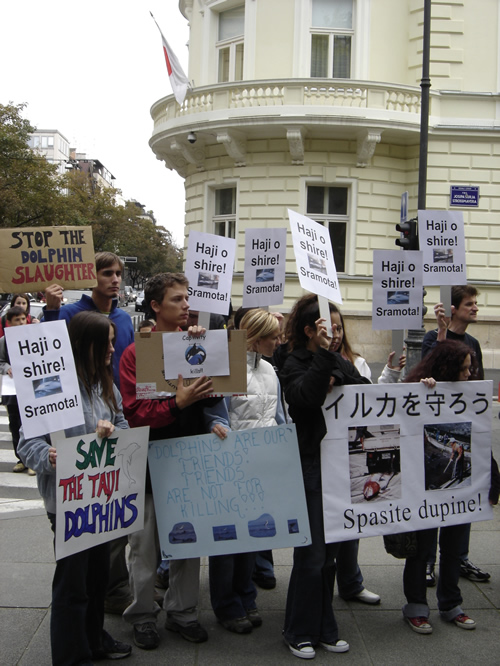