"Trapped" and Bloodied Activists Protest in Front of the British Embassy

- Croatian Animal Rights Activists Call on Queen and British Ministry of Defence to Stop the Massacre of Black Bears for Ornamental Headpieces!

Dressed in black and wearing bear masks, four members of Animal Friends in front of the British Embassy with their limbs bloodied and painfully caught in steel traps will represent how real bears are baited and caught in the wild for the Queen's Guards' ceremonial headgear.

The protest will take place on Thursday, September 21, at 12 noon, in front of the British Embassy, Ivana Lucica 4, Zagreb.

The protest is part of People for the Ethical Treatment of Animals (PETA) Europe's ongoing efforts to call on Her Royal Highness Queen Elizabeth and the British Ministry of Defense to stop this barbaric trapping and killing of bears. Almost 200 compassionate MPs in British parliament already gave support to this initiative with their signatures, calling for the use of faux fur in the Guards' hats.

It can take the entire hide of one bear to make just one cap. Many of the bears killed for these caps are snared in traps and often languish in agony for days. Others are shot several times before they die. Some escape the hunters and bleed to death. When mother bears are killed, orphaned cubs are left behind to starve.

"We're out here today to expose the gruesome truth behind the Queen's Guard's hats. The British Ministry of Defense has blood on their hands while they allow bears to be slaughtered for nothing more than ornamental hats despite the availability of beautiful, cruelty-free materials," says Luka Oman, Animal Friends president. "Tradition is no justification for torturing and killing animals."

With this action, Animal Friends Croatia gives full support to PETA Europe's efforts to call on the Queen's Guards to stop wearing hats made of bear skin. Fur farming is already banned in the United Kingdom, however, fur is sold within the UK from animals killed in other countries.

There are important legislative changes proposed in Croatia. The new proposed Animal Protection Act should put controls on breeding animals for fur in Croatia allowing Croatia to follow positive progress regarding animal protection in Europe and the rest of the world.

For more information about PETA's European campaign to stop the killing of bears for the Queen's Guards' ceremonial headgear please visit www.unbearablecruelty.co.uk. 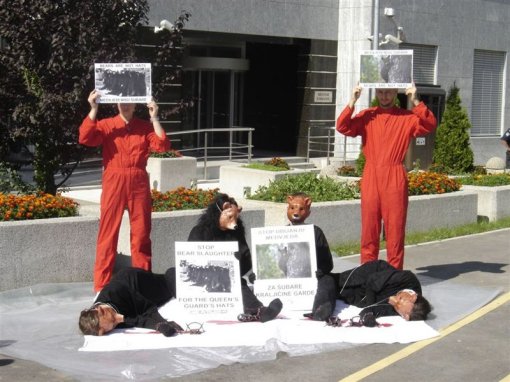 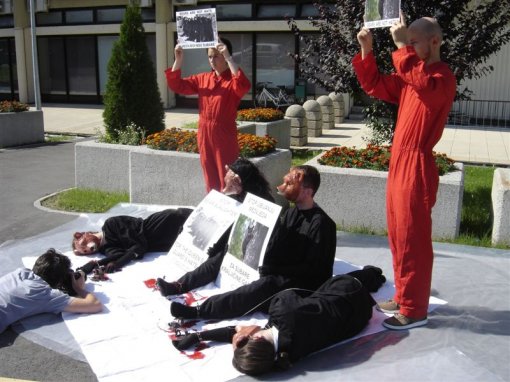 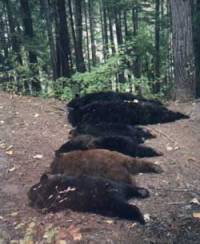