- Slaughter is not entertainment! Or maybe nevertheless it is to some?

After the recent reality show in which the main actors were bugs, amphibians and other invertebrates, in a battle for media space and bigger popularity, soon we will live see exploitation of cows, pigs, rabbits and other domesticated animals for entertainment on our telescreens as well! According to the announcements of the marketing department of the reality show "The Farm," there will be bloodshed, too!

Animal Friends strictly opposes to any kind of exploitation of animals for entertainment or profit and invite to a protest against the torturing and killing of animals in the reality show "The Farm." Protest will take place on Wednesday, February 27, at 12 noon at Ban Jelacic Square in Zagreb.

Carrying a clear message against slaughter of animals on 15 posters, the protesters will also address all participants of the reality show "The Farm" to show to the Croatian public whether they are mature enough to refuse a participation in a cruel and uncivilized amusement show with animal slaughtering. In front of a million TV viewers they will have the opportunity to re-examine themselves and see on which degree of ethics and compassion they are, and with their decision receive the national award of being a pozitive or abhorred negative.

The reality show "The Farm" is not a documentary about life without modern technology and electricity, but the show that, for the purpose of higher ratings and profit, presents the cruel act of slaughtering as a family entertainment. What kind of message has thus been sent to the public?

Animal Friends opposes to raising and killing of animals for human consumption and promote a meat-free diet, but they also ask themselves is it really all right to kill for someone's amusement – no matter if it is accordance with the law and monitored by experts?!

The production of the reality show "The Farm" should forbid the slaughter of animals for this show. This would not diminish the interest of televiewers for watching the survival of celebrities in, for them, unfamiliar, unnatural and somewhat difficult living conditions.

Even though contestants of the reality show "The Farm" eat meat in their everday life, they do not slaughter them and they have no excuse for eating them after they killed them during the show. Animal Friends calls the inhabitants of "The Farm" not to shed blood of innocent creatures for a fistfull of dollars, but to fill their mind with compassion and reason, and thoughts about their reputation after the show.

Animal Friends is not against the showing of scenes of slaughter but against the killing of animals. If it comes to the slaughter, the act of killing should not be hidden from the eyes of televiewers but rather show it publicly without censorship as it is – bloody, ugly, cruel, and unnecessary.

Video footage from the Slovenian reality show "The Farm" can be seen at http://www.index.hr/vijesti/clanak/video-kultura-klanja-na-balkanu/373979.aspx 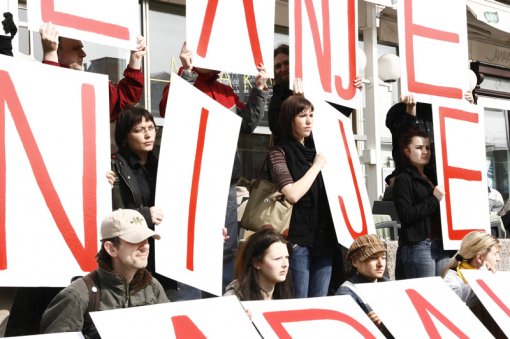