Dogs are now located in the yard of their trainer in dog crates sized 2x3 meters where they have a kennel and shade canopies to protect them from sun. Trees in the yard additionaly protect them from direct sunlight. A garage will soon be redecorated into a home like the space where dogs will spend few hours a day so they can learn how to behave inside of the living space. Dogs will soon start to take walks in the city.

Tula and Ara are in the shelter ever since they were puppies so they are having a hard time to adjust to the new situation. In the beginning Tula was very confused but also very motivated to work, however she simply couldn't decide what to do first. Today she is the only one that spends most of the time outside of a dog crate – she is that good. She doesn't try to run away from the yard and she doesn't even act crazy. All in all, Tula is very dear companion animal. She is a definitely Labrador mix breed. She is very grateful dog. 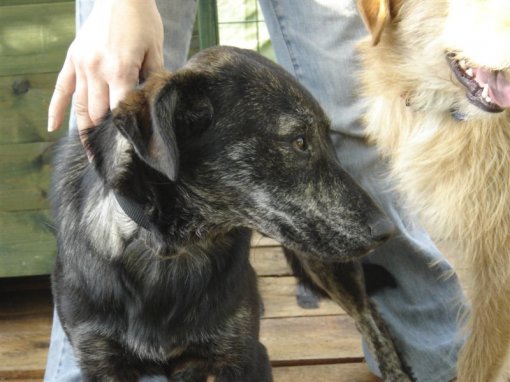 Berta is a very good dog. Very calm-natured, motivated to work and companionable.

In the beginning Ara was barking and whining a lot and she was mad when she had to do anything. She was very scared when she came from the shelter. In the meantime she relaxed and started to play with the trainer and other dogs. She and Berta are the smallest in size and are ideal for life in apartments.

Zuco is adorable, very cuddly but is sometimes aggressive to other males therefore he cannot be outside of the crate at the same time as Amon. He loves the company of people.

Amon is a very intelligent dog, quick learner and does great in trainings. Amon's problem is his great desire for freedom. He was already adopted for four times but he ran away every time before. So far he isn't running away but he is allowed to be outside of the crate only on 16 meters long leash. We are about to see how will he behave during walks in the city. However, he is truly beautiful dog. He loves the company of people, he is very active and playful dog. It would be ideal if he was adopted by someone young willing to play and take long walks.

If you want to adopt any of these dogs feel free to contact us.