Also this year Meatout will be marked in Croatia - in Cakovec, Karlovac, Koprivnica, Osijek, Rijeka, Slavonski Brod, Sisak, and Zagreb. The organizations Animal Friends and Voice of Animals will introduce the variety of a meat-free diet to the public through vegan tastings, recipes and educational materials.

Animal Friends invites citizens to come to the info stall on King Tomislav Square in Zagreb at 12 noon on March 20, where they will have an oppurtunity to taste healthy, meat-free products and meals such as veggie sausages and salami, tofu, seitan, vegetable sauces, plant-based milks and vegan kulen sausage.

Meatout was initiated by FARM - Farm Animal Rights Movement and has been marked worldwide every year on March 20 since 1985 on the first day of spring as a symbol of rebirth and the renewal of nature in order to help the consumers develop healthier and ethically acceptable eating habbits based on fruits, vegetables, legumes, and cereals.

In search of healthy meat-free products citizens are helped by the European V-Label which has been present in Croatia for a year now and which has been obtained by five Croatian companies so far. Billboards were placed in six Croatian cities (Osijek, Pula, Rijeka, Split, Zadar, and Zagreb) in order to intoduce the V-Label to the public.

Plant-based nutrition is ever more recognized as healthier and ethically acceptable. The number of citizens who decide to switch to a vegetarian diet in order to protect themselves from diseases typical for Western countries (cardiovascular diseases, obesity, diabetes and cancer) is on the rise. Research has shown that vegetarians have a 20% lower mortality rate of all diseases, live longer and get sick less often.

More and more attention is being brought to the impact the meat industry has on the environment, with special emphasis on its impact on global warming. The report of the UN FAO states that meat industry causes more greenhouse gases than the total world traffic. Therefore it is not surprising that the Chairman of the Intergovernmental Panel on Climate Change Dr Rajendra K. Pachauri and environmental activist Sir Paul McCartney are appealing to the public to eat less or no meat. 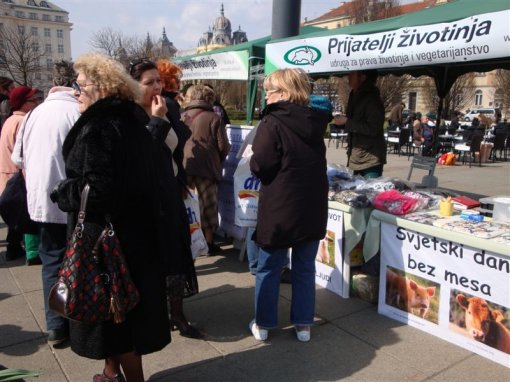