Animal Friends continues with their campaign "Family to the Seaside, Dog to the Street?"

Every summer upon going on vacation, the number of abandoned animals roaming the streets exposed to being hit or killed by car, hunger, thirst and violence increases. Citizens who kick out their family member break the law, show irresponsibility and a lack of empathy towards helpless animal and pass their responsibility for caring about their animal onto more compassionate citizens and overcrowded animal shelters.

Prompted by this inhumane practice, Animal Friends in collaboration with the Zagreb City Office for Agriculture and Forestry also this year continutes with the campaign "Family to the Seaside, Dog to the Street?," whose goal is to draw the public's attention to the issue of animal abandoning and encourage the adoption of abandoned animals instead of purchase.

The face of this year's campaign is the actress that plays the central character in the highly popular Croatian TV show "Lara's Choice" with the dogs Mala and Toro, who send the message "Let Adoption be Your Choice!" from the billboards. Those ads will be placed during the summer months in the Croatian towns Zagreb, Varazdin, Koprivnica, Osijek, Vukovar, Pula, Rijeka, Rovinj, Opatija, Porec, Split, Sibenik, Zadar, Dubrovnik, and other towns, with their clear message inviting citizens to adopt abandoned animals.

During the shooting, the famous actress Doris Pincic said: "I immediately liked the idea about doing this campaign 'Family to the Seaside, Dog to the Street?". I believe that educational campaigns like this one are very important in raising public awareness and in preventing the repeated occurrence of the problem. Animals are not objects to be used or disposed when we lost interest in them – they are living beings and it is our responsibility to care for them. Abandoning is a shameless and irresponsible act punishable by law. Animals should not be bought but adopted in order to give them a home and a chance for happy life.

Beautiful puppies calling for adoption from ads are just a few of the many homeless animals placed in the Shelter for neglected animals in Zagreb in Dumovec. Mala, the cheerful eigtheen-month-old pekingese mongrel, is still waiting for her caretaker, while the news about Toro is particularly painful. Toro, the smallest black puppy in the dog's kindergarten in Dumovec, was killed by the veterinary inspection in its recent death march. This campaign, beside its cheerful and positive message, every year results in the successful homing of abandoned animals from these billboard ads, so it is an indescribably sad fact that this playful little boy did not get a chance for a home full of love and life that has just been before him.

Finding out about Toro's fate, Doris Pincic said: "I am shocked by the news about events in the shelters in Dumovec and Noah's Ark and caretaker's homes. What shocked me most is the fact that Toro, with whom I posed for the ad, was one of the victims. I hope that something will be changed soon in the work of the veterinary inspection and that the killing of animals in shelters after 60 days will be banned because issued must be solved without killings. Each animal deserves a chance to live."

Therefore, with this year's campaign "Family to the Seaside, Dog to the Street?" we also pay tribute to Toro and other animals who did not live long enough to be homed. We also invite citizens to support shelters which do not kill animals and open the door of their home for abandoned dog or cat.

By taking part in the campaign "Family to the Seaside, Dog to the Street?" Doris Pincic joined Mirna Maras and Mario Valentic, Marko Tolja, Franka Batelic, Gala Svilan, Andjela Ramljak, Tatjana Juric, Nikolina Pisek and Maja Vucic, all of whom previous years invited citizens to adopt animals, not to abandon them and to responsibly care for them.

The tourists that visit Croatia return to their homes shocked by the huge numbers of abandoned animals who often present a threat to humans. Also the lack of no-kill shelters for abandoned animals and programs of education and homing required by the Animal Protection Act lacks. That is why this campaign stresses out the importance of microchipping of all dogs, which will make it easier to find caretakers of abandoned dogs and enable the enactment of the Animal Protection Act, by which the abandoning of animals is punishable by a 15,000 kuna fine.

Photos of the campaign "Family to the Seaside, Dog to the Street?" are shot by Goran Katic in Omnibus studio. Nives Spajic did a make-up while Ivana Kidzemet did Doris' hair. The ad is designed by Maja Zaklan. This campaign is supported by the City Office for Agriculture and Forestry of the City of Zagreb, Iskon, Zale, Arto, Europlakat, Print Grupa, Pink Elephant Yoga House, Autokuca Cindric and MojPosao. 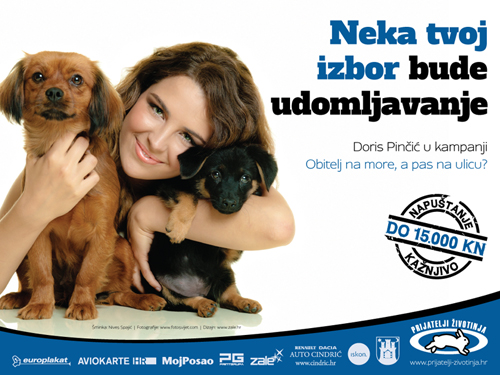