"Choose Your Battles" is a campaign against animal abuse launched by the animal shelter Dumovec in collaboration with Animal Friends. The campaign has been joined by some of the most famous Croatian combat sportsmen - Mirko Cro Cop Filipovic and others who will participate in the oncoming fighting spectacle in Zagreb including Mladen Brestovac, Igor Jurkovic, and Mladen Kujundzic. The campaign will be accompanied by ads placed in the Zagreb region and all over Croatia, as well as a video clip.

The aim of the campaign "Choose Your Battles" is to emphasize the prevention of animal abuse. Combat sportsmen, who must be aggressive in their fights, are responsible animal guardians in their private lives and consider all violence against animals as unacceptable. Considering this, they are perfect spokesmen for this campaign and have posed in campaign visuals with dogs that have been saved from abuse and are currently accommodated at the Shelter for Abandoned Animals Zagreb at Dumovec.

The fighters, who are heavily preparing for the great Glory fighting spectacle to take place on March 8 did not hesitate to spend some of their valuable time in order to support this noble cause. The dogs participating in the campaign enjoyed the sportsmen’s attention and the campaign also raises their chances of being noticed and considered as possible new family members.

Even though combat sports have been his life choice, Mirko Filipovic does not endorse "fighting" outside the ring in the least. He is especially against all forms of violence against animals and has therefore readily accepted to participate in our campaign. In the campaign visuals, Mirko Filipovic holds small Elsa on his lap, who was left in front of the shelter in an advanced age after she had been abused. Cro Cop has rescued many dogs from the street and is the guardian of several: "Abandoned dogs just break my heart, I wish I could adopt them all."

Mladen Brestovac was making friends with Thor at the shooting, a dog saved from neglect, and these two big guys liked each other from the start. The fierce fighter Igor Jurkovic became quite tender when he took small, friendly Flora in his hands, who had likewise been saved from abuse, while Mladen Kujundzic helped Ringo, a shy dog, to get through the shooting without stage fright.

Animals suffer various forms of abuse - from abandonment and neglect to being wounded, beaten, and killed. Repeated campaigns aimed at educating people about the responsible treatment of animals result in an increased number of adoptions and reports made by people who have observed some form of animal abuse or inadequate treatment.

The visuals and video materials, as well as information on how to join the campaign, can be found at: www.birajsvojebitke.com.

Besides the Dumovec Shelter and Animal Friends, the campaign "Choose Your Battles" involved the Info Center SUZA, which has a rich experience with lost, found, and abused animals.

Gordana Popovic, Mladen Popovic, and Anita Nadj produced and processed the campaign photographs, made with the help of stylist Zeljka Horvat. The campaign "Choose Your Battles" has been endorsed by the Zagreb City Office for Agriculture and Forestry, and cosponsored by the companies Zale, Europakat, Arto, Vektor Grupa, and Core Gym.

Representatives of the mass media also have access to the video materials: the video clip and the interview with the fighters.

Video footage from the photoshoot: 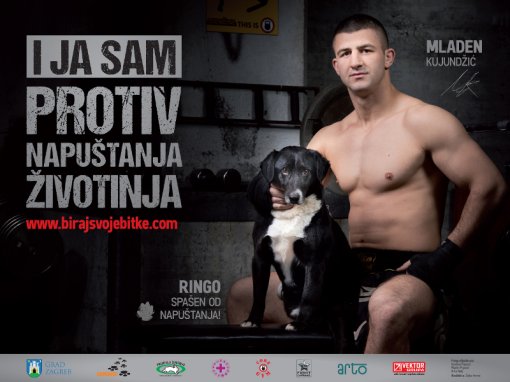