The proposed text of the Association:

Explanation: for years, citizens contact us as an association, disgusted by the inhumane conditions of keeping live animals intended for human consumption in the stores, as well as their killing before customer eyes. This applies particularly to Maxi Super Konzum stores who are keeping live fish in the aquarium where are stuffed two hundred other fish brought from the farm. The fish in that area do not have room to move, the water is dirty, and some fishes have injuries, seen by the fact that the water in which they are located is sometimes bloody. All this is happening in front of the eyes of thousands of customers who daily go there and are shocked by the apparent negligence of employees and visible fish torture.

We are aware that live animals trade as well as the meat trade of killed animals, first of all, are profitable business, and that all aspects of trading subordinate the accumulation of profit. Nevertheless, that's no excuse for violating the law and for stores to be slaughterhouses.

By the Animal Protection Act it is prohibited to kill animals, put them in pain, make them suffer, injure them and intentionally expose them to fear and restrict the movement of animals in a way that causes them pain, suffering, injury or fear. From the citizen reports we see that in this case there is no adequate law enforcement nor monitoring of the stores that run and sell live animals for human consumption and therefore there is no appropriate sanctioning of offenders.

Although the Animal Protection Act regulates the protection and welfare of animals during their keeping, it hasn't explicitly prohibited the sale and killing of live animals intended for human consumption in the stores, which has become a more common problem in many of them. We believe that the Animal Protection Act would not allow to open "small farms" in stores where live chickens are about to be slaughtered, so it shouldn't be like that even with the fish.

In fact, a study conducted at the University of Guelph in Canada demonstrates how fish react to fear much like other animals that are normally believed to have the ability to feel. According to one researcher: ''There are more evidence that fish possess a certain degree of awareness than there are evidences against it, so it is likely that fish have the ability to feel then not to.'' The study is focusing to determine whether fish has the neuro-anatomical structure which allows them to have consciousness and to experience pain and suffering:(http://www.awionline.org/pubs/Quarterly/05_54_04/05_54_4p19.htm).

The Animal Protection Act applies to all vertebrate animals, and fish are also vertebrates and have the capability to feel pain and suffering.

It is important to underline that all the fish found on the market has to be fresh, and therefore it is not justified to sell live fish by using marketing statements maintaining that it is fresh. There is no point in keeping live freshwater fish in shops and killing them in front of the customer, while the sea fish is held on ice.

The Ordinance on Conditions for Establishments Dealing with Food of Animal Origin that are Approved under Special Conditions defines the fish shop as "a place of retail sale of fishery products and live shellfish".

The Ordinance on the Hygiene Rules for Food of Animal Origin states: "Fresh fishery products are unprocessed products of fishing which are whole or processed, including products with vacuum packaging or products packaged in a controlled atmosphere, and which do not need to undergo other processes except cooling."

These regulations do not define selling live fish in fish shops. We are not familiar that a regulation exists which would regulate keeping live fish in fish shops, who kills the fish, and whether the persons killing the fish went through training, whether they use standardized equipment for killing fish, and other. If there is no regulation which would regulate this field, then all which is not forbidden, is allowed.

Since it is impossible to control the shops which keep live animals for sale and kill them in front of the customers, we deem it necessary that a provision explicitly prohibiting the keeping and selling of live animals intended for human consumption in shops, is integrated into the Animal Protection Act.

The Association's proposition for this amendment of the Animal Protection Act dates from 2015/2016.

Due to the inability to control the stores which sell live animals for consumption and eventually kill them in front of customers, we deem it's necessary that the Animal Protection Act include a provision that would explicitly prohibit possession and sale of live animals intended for human consumption in the stores.

This updated version of our Proposition dates from years 2015./2016. 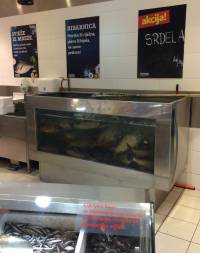