- Historical achievement: Croatia celebrates because it has become a state with no-kill policy in animal shelters!

Parliamentarians have listened to the message from one of the banners with which Animal Friends Croatia's activists met them in front of the Parliament this morning: "Raise your hand for someone's paw or hoof" and thus on World Animal Day, October 4, after 10 years, the new Animal Protection Act has been passed. Along with many positive changes, animal protection associations and citizens celebrate the great historical and civil achievement of this Act - no more killings in Croatian animal shelters!

The new Animal Protection Act introduces many prohibitions on abusive behavior against animals, including a ban on permanent breeding of dogs, animals used in circuses, no more bears and dolphins in captivity, sexual intercourse with animals, live feather plucking, sales of tame ferrets in stores, throwing firecrackers on animals, keeping wild animals in gastronomical facilities and for public display, killing dogs and cats for the purpose of food production and other products, a partial ban on the use of equines for harvesting wood from forests....

Counties will have to build shelters for abandoned animals in which spaying/neutering of found dogs and cats will be required, as well as microchipping and registration of cats. Spaying/neutering can be required by the minister and local self-government units in areas with a major problem of abandoned animals as well as the veterinary inspector can require the same for individuals who do not care of the offspring of their companion animals.

The implementation of the Act and the reduction of the population number of abandoned animals will be accompanied by a provision stipulating a deadline for the control of microchipping dogs, as well as the establishment of a single information center for the recording of lost and abandoned animals and will also assist in the organization of coordinating working groups in municipalities and cities that will encourage adoption of dogs in shelters, microchipping, spaying/neutering and education on abandoned animals. The counties will accordingly make a population control program for abandoned dogs. Juveniles can not adopt animals from a shelter, which will prevent animal abandoning.

Although the power to implement the Act had already been transferred to communal custodians in 2013, their powers are now better defined so they can check the conditions for keeping companion animals, read microchips, file criminal charges and notify the veterinary inspector, while the money from fines goes to local self-government units for abandoned animals.

Finally, it corrects injustice and regulates the chaos that has been dominated by pet trade for decades and the great problem of black market trades because the law stipulates that anyone who has one or more bitches for breeding and sale of companion animals is required to register from now on, which is extremely important. Also, in the advertising of dogs for the purpose of sale or change of ownership, the number of the microchip of the dog and the number of the microchip of the mother dog must be published.

It is also positive news that, after being used in experiments, laboratory animals before euthanasia must be put up for adoption. The local self-government unit has to fund helping injured animal if no one knows who has hurt them, which has been a big problem so far when wounded animals were found.

Although the new law brings many positive news and reasons to celebrate, the real work only begins now - the implementation of the law and further improvement of the protection of all animals. Animal Friends Croatia thank all citizens, institutions and politicians who had backed the good provisions of the new Animal Protection Act and the Parliament, which by passing this law best marks World Animal Day.

Animal Friends Croatia at today's World Animal Day invite everyone to do something for the animals, by adopting instead of buying, reporting animal abuse and abandonment, trying the vegan diet, wearing clothing and footwear from non-animal materials, using products that are not tested on animals and become active in other ways for the animals.

The photo gallery of activists welcoming the new Animal Protection Act in front of the Croatian Parliament. 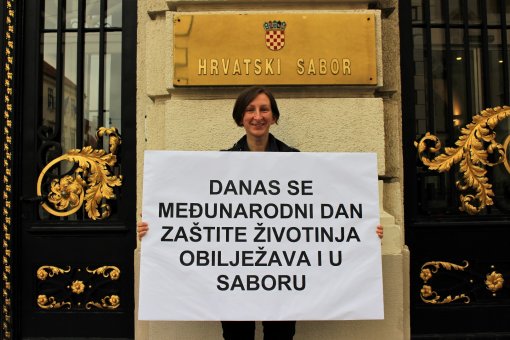