Animal Friends announces the visit of the worldwide acknowledged expert

- Mr. Richard O'Barry, currently the most esteemed expert for cetaceans in the world arrives in Croatia

Richard O'Barry in his 40 years of experience has worked both sides of the dolphin street, the first 10 years with the dolphin captivity industry, the past 30 against them.

Working back in the 1960s for Miami Seaquarium, O'Barry captured and trained dolphins, including the five dolphins who played the role of Flipper in the popular American TV-series of the same name. When Cathy – the dolphin who played Flipper most of the time – died in his arms, O'Barry realized that capturing dolphins and training them to perform silly tricks is simply wrong.

From that moment on, O'Barry knew what he must do with his life. On the first Earth Day, 1970, he founded the Dolphin Project, dedicated to freeing captive dolphins who were viable candidates and educating people throughout the world to the plight of dolphins in captivity. Over the years he freed 24 captive dolphins back into the wild. He launched a searing campaign against the billion-dollar dolphin captivity industry, telling the public what was really going on at dolphin shows and dolphin swim programs and urging people not to buy tickets to see dolphins play the fool.

That very same Richard O'Barry this week visits Croatia to urge Croatian public not to allow dolphins in captivity in a country which with can with pride claim the first dolphin protectorate in the Mediterranean!

Mr. O'Barry also carries an open letter from Lori Marino, Ph.D., Neuroscience and Behavioral Biology Program from the U.S. for the Vodnjan municipality, Ministry of Culture and Ministry of Agriculture, Forestry and Water Management in which she amongst other things presents the results of studies of swimming with dolphins on health of children, which showed that the methods used by practitioners of dolphin-assisted therapy are not scientifically sound and the studies are seriously flawed.

Mr. Richard O'Barry will hold a press conference on Wednesday, March 21, in the National and University Library of Zagreb, Hrvatske bratske zajednice 4, at 12:30 A.M., after which he will visit the Nature Protection Directorate at the Ministry of Culture.

On Thursday, March 22 at 4 P.M. Mr. O'Barry, accompanied by Animal Friends' representatives, will meet with the mayor of Vodnjan Mr. Klaudio Vitasovic in the Vodnjan City Government, where he would like to introduce him to the dangers of captivity for dolphins and humans included in programs with dolphins, appealing to him not to allow the construction of a dolphinarium in the aquapark Aquamania in Vodnjan.

The mayor of Vodnjan in his letter to Animal Friends said: "If your demand will be backed up by an expert opinion, believe me that as a big animal lover I will immediately propose discontinuance of this project." Therefore, after all expert arguments of Richard O'Barry and Lori Marino will be presented, the mayor's decision is to be expected. Animal Friends' representatives and Mr. Richard O'Barry will be available for statements to the media.

To recognize his contribution, in 1991 O'Barry received the Environmental Achievement Award, presented by the Committee for the United Nations Environmental Program (US/UNEP). He published two books about his work and dedication, and today he works as the Marine Mammal Specialist for Earth Island Institute, a leading international environmental organization that aims at stopping the killing, capture, confinement, and commercial exploitation of dolphins and other whales worldwide.

Richard O'Barry will give a public lecture in Zagreb where everyone is invited to listen on Friday, March 23 at 5 P.M. in the Cultural Informative Center, Preradoviceva 5.

Mr. O'Barry comments the industry which he has fought for more than 30 years already: "The people who capture and confine dolphins are telling the public they're doing it to teach the public respect for nature. This is the hypocrisy that this industry is based upon. In reality, they're in it for the money. Take it away, and they'll quit treating dolphins like this." 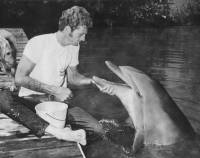