Animal Friends continues to demonstrate on the streets setting up information stalls and inform the public about the suffering of animals and the destructions of our planet and human health. None of these three issues seem to be important to the multinational company McDonald's. They kill millions of animals for making unhealthy food that will slowly poison "their satisfied customers" and to raise and feed these animals rainforests are being destroyed and air and water is being polluted.

Many people all over the world protest against McDonald's. There's even a World anti-McDonald's Day on October 16. Animal Friends will join protests all around the world against this multinational company by organizing a day-long demonstration in front of the McDonald's restaurant on Jurisiceva ulica on Tuesday October 16, 2001. Animal Friends will get support from "Slavonsko baranjsko drustvo za zastitu zivotinja-Zivot" (Animal Protection Society Life from Slavonija & Baranja).

By demonstrating in front of the restaurant we want to show the public what McDonald's is trying to hide: millions of animals are being killed in an extremely cruel way and rainforests are being destroyed to raise and feed those animals. Rainforests are the "lungs of the world" because they produce oxygen and burning the forests contributes to global warming. We want to highlight that McDonald's serves unhealthy food that will damage people's health. They manipulate children with toys and gifts and let their mascot Ronald McDonald tell lies such as "hamburgers grow on trees". Flyers will be handed out to passers-by during the demo in front of the McDonald's restaurant in the city center. 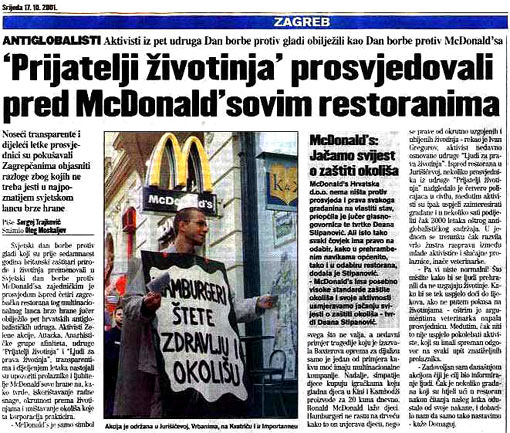