- Representative of Animal Friends in London for ending animal experiments

The European Coalition to end Animal Experiments (ECEAE), of which Animal Friends is a member has, today in London, requested a ban on animal experiments for household cleaning products. Members of the ECEAE, including a representative of the association Ms Anita Euschen, gathered at Parliament Square and carrying mops and brooms, presented a "dirty" map of the EU, in order to encourage further legislative changes.

On the March 11 the ECEAE marked the second anniversary of the completion of a successful campaign for the end of animal experiments for cosmetics. In fact, in March 2013 the EU introduced a ban on the import and sale of cosmetics tested on animals. The ban followed a strong ECEAE 20-year public and political campaign, which attracted wide attention from the public and the media and has increased awareness and gained support of European politicians and consumers. The campaign was supported with the signatures of Croatian citizens.

Already Croatia can be proud of its Animal Protection Law that bans animal experiments for research and also for the development of chemicals for cleaning and the disinfection of consumer goods, as drugs and for the general effects of radiation. With its positive example Croatia and Animal Friends are sending a clear message, appealing to lawmakers in the rest of Europe and the world to do the same – to ban cruel animal experiments for household cleaning products.

The General Director of ECEAE, Ms Michelle Thew has stated: "We are very pleased that animal experiments are finally banned in the EU and we are very proud of the fact that we have played a leading role in this important achievement. Still, there is a lot of work ahead of us. There are countless numbers of rabbits and other animals which are injected by chemicals, poisoned by gas, fed by force and killed in order to test ingredients of household cleaning products for everyday use; such as dishwasher detergents, air fresheners and dishwasher tablets. We want Europe to send a message to world leaders so as to forever clean itself from cruelty by banning the testing of household cleaning products on animals."

Ethically aware consumers can now be sure that they are purchasing cleaning products which have not been tested on animals if they find them listed with over 600 companies. The list of companies available in Croatia, which satisfy conditions of Humane Cosmetics Standard (HCS) and Humane Household Products Standard (HHPS), can be found on the following link.

The ECEAE's campaign for the ban of cosmetics tested on animals has received huge support for its efforts to stop cruel and unnecessary experiments on animals, including the support of prominent celebrities such as Sir Paul McCatney, Chrissie Hynde and Sienna Miller. In Croatia there were celebrities such as Bojan Jambrosic, Ivana Radovnikovic and Blazenka Leib who were involved in campaigns against animal experiments organised by Animal Friends.

The ECEAE combines high level of expertise, experience and knowledge of leading European organisations for the protection of animal rights; it cooperates with representatives and officials in the European Parliament, promotes modern science and advanced legislation, organises educative campaigns and cooperates with companies in order to encourage them to abandon animal experiments.

Through the White List, the Animal Friends association provides information about companies that satisfy the HCS and HHPS standard and calls on all citizens to visit the website www.prijatelji-zivotinja.hr to read more information, to support companies that do not test on animals and thus help prevent cruelty. 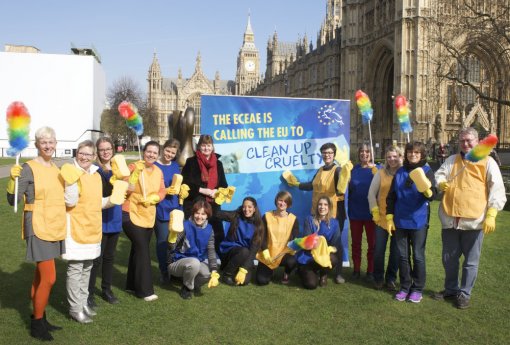