Popular Croatian rock band Vatra and their charismatic frontman Ivan Decak have joined this year's summer campaign titled "Family to the seaside, dog to the street?". Vatra showed their support by lending their faces to the campaign, and are featured on the billboards in many Croatian cities.

Besides the slogan "With You on the Busiest Roads", the central message of the campaign can be summed up in a series of questions which should be considered by everyone thinking about getting an animal:

Vatra band members urged citizens to be responsible adopters, and Ivan Decak commented on the problem of abandonment: "Imagine what it would be like to have everyone disown you and throw you out on the street. Don't do to others what you wouldn't want done to yourself, be it people or animals!" Bass player Tomislav Susak stated: "For me, animals are a responsibility which you have to consciously accept. They are living beings whom you have to take care of. Getting an animal should not be a spur-of-the-moment decision. You will have to change and adjust your life habits because animals are our life partners who deserve our full attention and love."

Animal abandonment is a serious problem in Croatia, but even more alarming is the fact that many cities still do not have adequate animal shelters, info centers, spaying/neutering programs, and citizen education programs on animal welfare in spite of their legal obligation.

The data from registered shelters for 2014 available to Animal Friends Croatia does not indicate a high level of concern for abandoned animals. Last year, 11 shelters that provided the data housed more than 4000 animals – more than 300 animals per shelter! According to the data, about 2000 animals were adopted. As there are only five no-kill shelters in Croatia, hundreds of animals were put to death, which is a national embarrassment. Only 1000 animals were spayed/neutered.

Vatra and dogs Bobica and Jasper advocate adoption instead of buying animals and encourage you to raise your voice against the abandoning and killing of animals, but emphasize that adoption entails a lifelong commitment and adequate care.

The billboard image, more information on how to help abandoned animals, and classified ads for adoption and pet sitting can be found at www.prijatelji-zivotinja.hr. 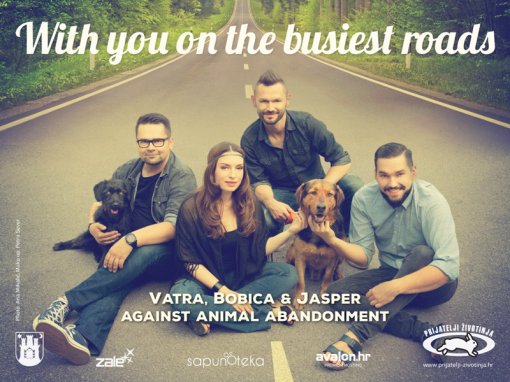 Here are photographs from the campaign's photo session: