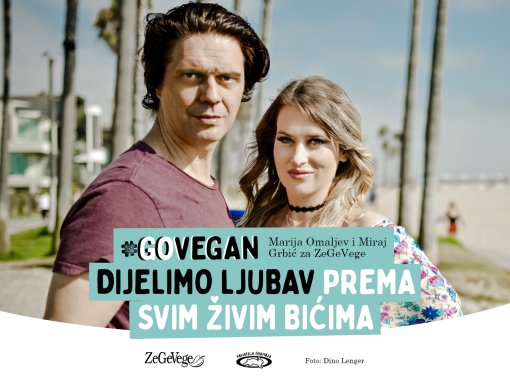 On the visuals of Animal Friends’ billboards, actor Miraj Grbić, the lovable Čombe in the megapopular tv-show Crazy, Confused, Normal, and actress Marija Omaljev, known for her roles in tv-shows such as Wind Rose, Sun Valley, Forever Young, and Married Life, are sending a clear invitation to share the love of all living beings.

“We went vegan three years ago. One day, Miraj said: ‘I can’t eat animals anymore. I can’t keep ingesting that death energy.’ I asked him: ‘That sounds great to me. Will you be eating fish?’ He replied: ‘Well, fish are living beings too.’ That made think about what I was eating. In the end, veganism came to me like a kind of eye-opener, like when you look at something from a particular side and your whole perception of it changes. You can again never look at something like you did before because you’ve figured out the lay of the land. After three years, we are both completely happy with our choice. Our health is perfect, my so-called ‘familial high cholesterol’ has disappeared, my skin is clearer and more radiant, and Miraj’s blood picture is perfect now too. It’s definitely one of the best decisions we have ever made. The love for humans, animals, our planet is something I would definitely recommend to everyone,” says Marija, revealing how she and her husband Miraj chose to go vegan.

“When I look into the eyes of a pig or the eyes of a dog, I no longer see a difference. I finally understand what people mean when they say: ‘Did you eat something that had eyes, that was once in its mother’s stomach, just like us?’ In the age of the Internet, when we can see how our ‘food’ is made, I think that ignorance and cruelty are a matter of choice, not a coincidence. I understand that everyone has their own pace, their own free will, and I would not want to push anything on anyone, but I would recommend that everyone try a vegan diet for a few months and I am sure they will enjoy the results, the amount of energy, and the overall improved state of body and mind.

Eating the meat of certain animals and drinking, for example, cow’s milk, which is not intended for us, but for the growth of calves, has been imposed on us as the norm, something we have been taught is normal since we were little and we’ve never questioned it, until now. Although vegans are much less likely to develop heart disease and many types of cancer, the inflow of that kind of information is being slowed down for the sake of profit, to our detriment, but also to the detriment of animals and the environment.

Since we are living in Los Angeles, I have noticed that a lot of doctors and famous actors here are opting for a vegan diet. Some of them are publicly speaking up about the benefits of a vegan diet; for instance Arnold Schwarzenegger, Natalie Portman, Joaquin Phoenix, Benedict Cumberbatch, Peter Dinklage, Liam Hemsworth, Miley Cirus, and Ariana Grande are publicly promoting veganism as a way of life, for the sake of animals and planet Earth, because we do not have a spare planet yet.

It would be good if we could find some compassion in our hearts, because the food we choose to have on our plates can make a big difference to the many scared animals in slaughterhouses with a knife pressed against their neck. At a time when our money dictates the market, let’s channel it towards more compassionate products, because change does not start with some other people out there, but with ourselves. In a world where cruelty is the norm, choose mercy,” says Marija Omaljev.

Due to increasing demand, the supply of vegan products and convincing meat and dairy substitutes is growing drastically, with the trend of vegan fast food evolving as well. These kinds of dishes and products will be available for tasting at ZeGeVege, which is bound to attract many visitors with its over 100 exhibitors and restaurants.

Animal Friends would like to thank everyone who contributed to the making of the visual "Share the Love of All Living Beings" and would like to invite everyone to explore the rich program of Croatian Veganmania at www.zegevege.com.