The most famous calf in Croatia once again calls for veganism

In a sea of unfortunate news about the sad fates of people and animals during the earthquakes in Sisak, Petrinja, and the surrounding area, one story continues to melt hearts on social media. Calf Borna, the first calf in Croatia to be born free, turned six months old to the delight of all her fans, and most of all his mother Šarava to whom Borna is the first calf that was not taken away from her in order to end up in a slaughterhouse. Pigs Bela, Lajka and Luna were also rescued by Farmica and Pobjeda Association volunteers from the earthquake-stricken village near Petrinja.

„Borna's life has in just six months been endangered already twice in extreme weather conditions. First, the earthquake saved his life, and just when he was six months old, extreme rains flooded Farmica to such an extent that they had to move animals to the woods. However, just when the situation became the worst and the Farmica could no longer be approached, the rain stopped and everything calmed down, so the lovely big baby can still fulfill its calling – to call for a vegan lifestyle that, among other benefits, helps the environment and our health“, points out Animal Friends.

Borna is beautiful innocent creature who, with his story and happy life, which, unfortunately, no other calf in Croatia can boast of, has warmed many hearts, and now he once again invites you to apply for Challenge22. It offers many helpful tips and super recipes, with the guidance of experienced mentors who are available all day, all in good company. After completing Super Challenge you can stay in the community and expand your horizons and menus. Fill out the application form now“, recommended Ivana Varkonji from the Farmica shelter on behalf of her sweetest protégé.

Luka Oman from Animal Friends, who was involved in moving animals from the areas hit by the earthquake to a new home, explains: „Every day, thousands of calves are separated from their mothers to satisfy people's unnatural and unhealthy craving for cow's milk. Male calves end up in the slaughterhouse after intensive fattening. Because of Borna and all other calves in Croatia who are not as lucky as him, we invite you to sign up for one of the free services for an easier path to veganism, such as the Veggie challenge.

Animal Friends recently visited Farmica where, in addition to Borna, they met many other animals saved from the sad destiny of most animals raised for food: chickens, geese, goats, and pigs. They connected especially with the goat Hopy, whose legs were injured due to life he spend in a small and cramped space where he could not even turn around, and a prosthesis was recently purchased so he could walk again.

Photos of Borna and other animals from the Farmica sanctuary can be found HERE. 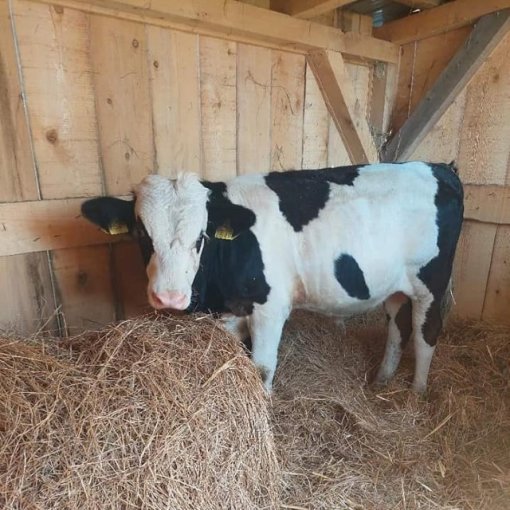