02/24/22 In slaughterhouses, they are beaten and called whores!

- Animal Friends Croatia: "Everyone should see these videos!"

"Come, come, come!" the employee invokes a pig, and his words are followed by violent kicks accompanied by electric shocks. The footage shows the terrified animals then descending into the gas chamber. It can also be seen that the bull has repeatedly tried unsuccessfully to stun him, while the unfortunate animal is convulsing, tormenting and crawling his tongue, and sparkling saliva is leaking from his open mouth. The small number of those who endure and continue to watch the video testifies to additional beatings, swearing and derogatory names such as: "Bastard!" and "Whore!"

The Slovenian association AETP (Animal Enterprise Transparency Project) launched footage revealing the horrific abuse of pigs on the Ljutomerčan farm, and a few months later published secret footage from the Košaki slaughterhouse in Maribor, recorded in 2020.

The association that provided the footage points out that most documented slaughter procedures, with the exception of beating animals and improper electric shocks, are completely legal under European regulations: "Bleeding pigs after using a high-carbon gas chamber is considered of the least painful ways of killing animals. But we can see in the footage that this way of stunning is far from the public perception that pigs fall asleep peacefully and painlessly in gas chambers. ”

The attitude towards the pigs in the gas chamber, where the animals end up and in the Košaki slaughterhouse, suggests that, despite attempts to stun with gas, the animals are suffocating in agony. AETP activists have confirmed that one of the main purposes of stunning is employee safety, not helping animals. Smaller piglets are stunned by a blow to the head, but they all end up the same - with a knife stabbed in the neck. Some bulls from the footage had their necks cut while fully conscious. The AETP adds: "We cannot read the minds of animals, but the professional literature in this area is quite clear: the smell of blood and screaming in animals cause anxiety and fear. Despite repeated electric shocks, the animals visibly resist persecution in the slaughterhouse because they realize that nothing good awaits them. That's why employees treat them so rudely. "

Animal Friends Croatia referred to the painful footage and emphasized that the same scenes can be seen in all slaughterhouses, even those that boast of humane treatment: “The truth about the slaughter of animals is not pleasant at all; commercial slaughterhouses are like a vision of hell. The entire life of animals before death comes down to unnatural breeding, cruel castrations and stimulation with hormones, long rides without water and food that lead to inevitable death. Slaughterhouse workers must become numb to be able to do what they are paid to do. Many are not even aware that they are further abusing these animals. Slaughter is the most brutal and massive animal abuse. ”

They explain that innocent animals, on the painful path of transformation into a piece of meat on a plate, are doomed to cramped pens, electric batons, twisting their tails, torture and fears: "There is no humane slaughter. Everyone who is appalled by these shocking shots should think about their eating habits and try a vegan diet, which is good for everyone. ” 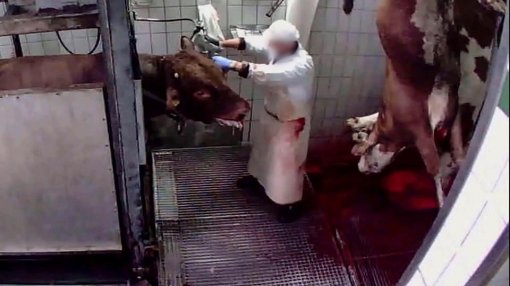