Blindfolded activists protest against Benetton over Australian abuse of sheep

Wearing blindfolds and carrying signs reading "Benetton: Blind to Animal Suffering," Animal Friends' activists will, as a support to PETA's (People for the Ethical Treatment of Animals) international campaign, gather outside Benetton's store in Bogoviceva ulica 9 in Zagreb on Thursday, December 16, from 11 A.M. to 12 noon.

With this action they will show potential customers a shocking video, "Australia's Secret Shame" on a portable TV and hand out leaflets protesting horrific abuse of lambs and sheep by Australia's wool industry. The action, which will coincide with a protest at the Benetton flagship store in New York, kicks off an intense international campaign to convince the retail chain to ban garments made with Australian wool until a gruesome procedure called "mulesing" (live flaying) and live sheep exports are banned.

"Mulesing" is a crude mutilation whereby Australian farmers carve flesh from lambs' backsides with a pair of garden shears and without painkillers as a cheap way to try to reduce flystrike - which is when blowfly eggs hatch into maggots and eat away at the sheep - even though more sophisticated, humane blowfly control methods exist. When their wool is no longer the best, millions of sheep are shipped to the Middle East through all weather extremes aboard open-deck, multi-tiered ships. Many sick and injured sheep, treated as mere cargo, are thrown overboard or ground up alive in mincing machines. Many of those who survive the grueling voyage are fully conscious when their throats are slit.

After repeatedly asking the Australian government to end these atrocities, PETA announced an international boycott of Australian wool in mid-October and has already won the support of prestigious retailers Abercrombie & Fitch, New Look and J.Crew.

"The 'united colors' of Benetton are turning to blood red," says PETA Europe Campaign Coordinator Andrew Butler. "If Benetton wants to wipe the blood of millions of sheep off its hands, it must refuse to sell clothes made from Australian wool."

PETA is urging consumers to boycott Benetton until it pledges to stop using Australian wool and is planning to bombard Benetton with ads and protests around the world to alert the public to the company's support of cruelty. For more information and above mentioned shocking video "Australia's Secret Shame," please visit PETA's Web sites UnitedCrueltyofBenetton.com and SavetheSheep.com as well as Animal Friends' web site www.prijatelji-zivotinja.hr where a photo gallery about wool, slaughter and transport of sheep can be seen. 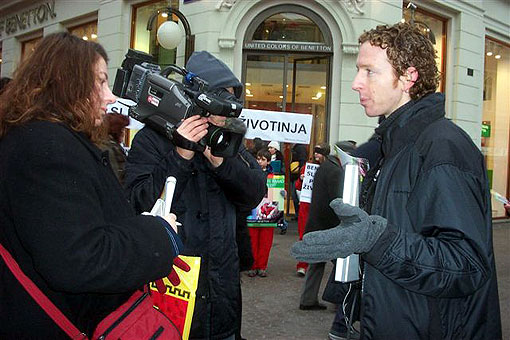