In light of the nationwide recall of 19 million pounds of E. coli-contaminated ground beef, PETA is encouraging grocery stores to bundle raw meat with toilet paper to remind consumers that every time they eat meat, they are eating feces.

Most of the 10 billion cows, pigs, and birds butchered every year in this country are contaminated with E. coli bacteria (not necessarily the 0157 variety), which comes from feces. A 1995 study by the U.S. Department of Agriculture (USDA) found that more than 99 percent of broiler chicken carcasses had detectable levels of E. coli. The March 1998 Consumer Reports-great bathroom reading material for meat-eaters-also reported that "some generic E. coli is present on virtually every chicken on the market..."

Selling toilet paper and meat together would not only save shoppers time, it may save their lives. According to the Centers for Disease Control and Prevention (CDC), food-borne illnesses cause approximately 76 million cases of gastrointestinal illness, 325,000 hospitalizations, and 5,000 deaths per year in the United States. Guy Plunkett, a scientist at the University of Wisconsin-Madison, where E. coli's genetic code was mapped, said that as few as 10 to 100 E. coli bacteria are sufficient to infect a human.

Food-borne illnesses often lead to severe diarrhea, vomiting, and cramping-and long lines at public restrooms. The CDC believes that many people who think they have the flu may actually have food poisoning from eating contaminated animal flesh. The March 1998 Consumer Reports indicated that fewer than 5 percent of food-poisoning cases are recognized and reported.

E. coli isn't the only bacteria bugging meat-lovers. Campylobacter is responsible for up to 7 million food-borne infections and 1,000 deaths each year. Salmonella sickens up to 4 million people and kills up to 2,000. The USDA has identified ground turkey as the most contaminated poultry product, with average salmonella levels of 49.9 percent. Chicken is also likely to contain campylobacter or salmonella, as well as listeria and leukosis (cancer). The crowded, filthy conditions on hog farms foster diseases such as dysentery, cholera, trichinosis, and toxoplasmosis, which are commonly found in pig flesh.

There is simply no such thing as "safe" meat. In addition to food-borne contaminants, animal products contribute to heart attacks, strokes, high cholesterol levels, obesity, high blood pressure, and a slew of other health problems. So, if you want to spend your time on the beach instead of in the bathroom-or the hospital-throw animal products in the garbage and go vegetarian. 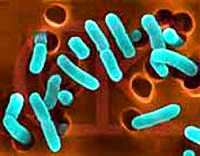