There is only one sport which doesn't give the opposing side even the slightest chance of victory. And only this sport allows that the defeated be eaten, lacerated, stuffed or have their heads cut and hung up on walls.

Captured animals that end up in circuses, zoos or aquariums seem to fare not much better, because they end up in an enviroment in which they are the object of care and efforts to "preserve their own species". But, the truth couldn't be more different.

People who have witnessed this "world of entertainment" first hand will tell you that in most cases the lives of these animals are filled with terror, torture, stress, depression, starvation... On the other hand, animals which participate in all kinds of fights have no chance whatsoever, and their only salvation is death at the end of the bloody game.

Find more information related to exploitation of animals for the sake of "sport and entertainment", and help us stop this bloody practice. Never forget - animals are not there on their free will. 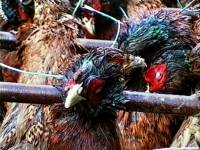