09/07/07 With Microchipping Against Abandoning

In Croatia there is a major problem with abandoned animals and their settlement, and only 20% of all dogs are microchipped. This is absolutely unacceptable because microchipping is one of the basics for the successful implementation of the Animal Protection Act. Animal Friends demands an urgent change of the regulations on the identification of dogs. We demand legal obligation for microchipping of all dogs, not just puppies.

So far nobody in Croatia has been punished for the crime of abandoning animals since the actual dog owner cannot be identified as most dogs have no microchips. It is unacceptable that most of the dogs still have no microchips, as this only postpones the solution of the major problem of abandoned animals.

According to current legal regulations it would take next 15 years for all dogs in Croatia to be microchipped. Therefore, the present regulation for identification marking of dogs should be changed so as soon as possible so next year most of the dogs could be microchipped.

Besides the legal regulation for microchipping of all dogs, there should be another important information which is the ID card number of the pet owner which would make it impossible to manipulate with incorrect data and make easier to find the pet owner if the address changed. It would also prevent minors to be stated as pet owners which is necessary because the Animal Protection Act bans the sale of animals to people under 18 years.

Therefore Animal Friends announces public a gathering in front of Ministry of Agriculture, Forestry and Water Management, Ulica grada Vukovara 78, which will take place on Friday, September 7, 2007, at 12 noon. Except humans the gathering will also be attended by dogs in order to represent the animals themselves which are supposed to be protected with microchips against suffering and death as consequences of abandoning.

Animal Friends sent a letter to the Minister Petar Cobankovic, the Minister Assistant Mate Brstilo and to the chief of the Veterinary Inspection Sector Andjelko Gaspar. Besides this AFC launched a petition which can be signed on our info stand on Saturday, September 8, 2007, at 10 A.M.

Imposing of legal obligation on microchipping all dogs would, besides prevention of animal cruelty, also contribute to financial savings in regard to care of abandoned dogs.

Obligatory microchipping also should be expanded to cats and other pet animals upon which this simple procedure can be conducted. 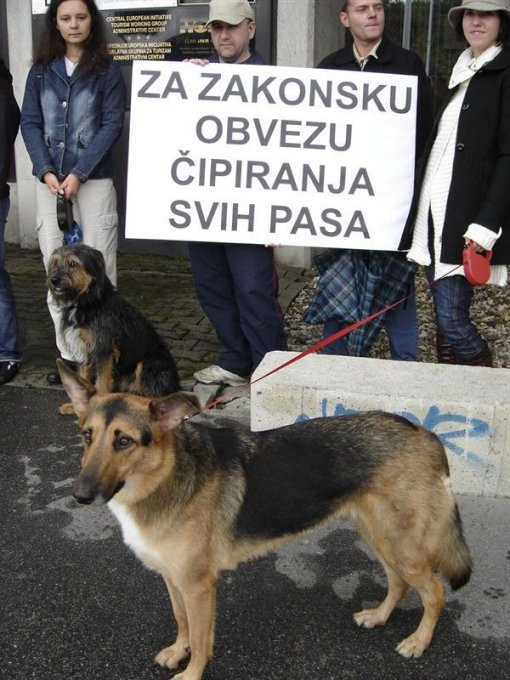