From October 26th, it is forbidden to kill animals in shelters, and irresponsible guardians face greater punishments

- The penalty for abandoning animals is now up to 30,000 kuna; the deadline for the microchipping of dogs is June 10th, 2018

On October 26th, 2017, a new Animal Protection Act came into force, bringing many positive changes and regulating deadlines for certain provisions and bigger penalties for irresponsible citizens, towns and counties so that the law can be successfully enforced in practice.

The penalties for abandoning animals and not taking care of their offspring will be doubled - now anywhere from 15,000 to 30,000 kuna. After the ban on permanently chaining and tethering dogs in Zagreb and Osijek, it will now be stressed across Croatia that citizens have to be responsible in ensuring decent conditions for dogs and enabling them to walk freely.

According to the new law, all counties must have a shelter by December 31st, 2018, at the latest. This refers to three counties in which a shelter has yet to be established and also for those counties with existing shelters that cannot accommodate at least 50 animals.

December 31st, 2018, is the deadline by which coordinative working groups in counties should gather representatives of local communities, inspections, police and animal protection associations in order to work on measures for decreasing of the number of abandoned animals. With the same goal, a June 30th, 2018, deadline is set for local units of self-government to carry out a control of microchipped dogs in their local communities.

Local units of self-government are obliged to participate in the implementation of the law and taking care of the animals, but also all shelters have an obligation to spay and neuter their animals (which had been done only by conscientious shelters until now). Permanent sterilization procedures will be able to prescribe a veterinarian inspector for individual cases, and the minister and units of local self-government in places with a rising problem of abandoned animals. According to the new law (and now in greater detail), the shelter founders are obliged to record data of abandoned and lost pets through a unique information center for abandoned and lost animals in a Register for pets by the Ministry of Agriculture.

Communal custodians have better defined authority with this new law, and the income from money fines they charge goes to units of local self-government for taking care of abandoned animals. An obligation to register all animals for sale and making public the number of a dog's microchip and the number of a mother's microchip when advertising dogs for sale will enable the transparency of animal breeders and will help reduce the black market and illegal breeders.

The new Animal Protection Act also bans: animal performances in circus; keeping bears (with the exception of zoos and shelters) and dolphins in captivity; throwing firecrackers at animals; selling ferrets in stores; poultry live feather plucking; use of equines for pulling logs and firewood out of forests (except in hard-to-reach areas); keeping wild animals in gastronomical facilities and for public display; stabbing, hanging, drowning, strangling or deliberately running over animals with vehicles; sexual intercourse with animals, which can result in the animals being taken from the offender's custody, a money fine levied on the offender, and the future exemption of the offender from care for or acquiring animals.

The new Animal Protection Act, with all its novelties, gives a good foundation for animal protection - especially regarding dogs and cats. However, in practice, the law will need the cooperation of the competent ministry, communal custodians, veterinary inspectors, vets, responsible people in communities, towns and counties, animals protection groups, institutions, and all citizens, to enforce these new protections and make the world a better place. 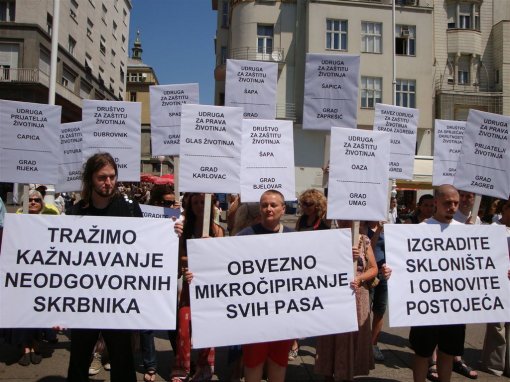