At the 9th Vege Fair, a new vegan sausage, behind which lies a warm and humane story about the desire to make the world a more beautiful place, will be presented to the Croatian Market. It all starts with Stella, a discarded piglet who found salvation in Koki, a Slovenian refuge that provides a lifelong home for cows, pigs, chickens, and other animals rescued from the slaughterhouse.

Anita Petrovic, a member of Animal Friends Croatia and a volunteer who stopped eating meat, milk, eggs, and honey primarily because of the animals, but also because of her concern for the environment, responded to the call for a work action to expand the housing. She met many animals and quickly realized that she could be as close to them as she was to dogs and cats, that they felt pain as well as love and happiness just like us. When she saw Stella it was love at first sight. The playful piglet that was supposed to be a suckling pig won her heart but also awakened in her an even greater desire to help all pigs and other animals.

Shelter manager Ksenija Veseljak told Anita and other volunteers who came to help and socialize with the animals about the sad fate of pigs and how much they suffer from birth to slaughter. She conveyed everyone the positive energy and will to make it worthwhile to fight for every life and not to give up the commitment to justice and freedom that has been taken away from animals. Thinking about how she could help Anita started from what she knows best, and that is cooking. Her goal was to make a sausage that no one has to suffer for, but that will still be spicy, greasy, and just as delicious as everyone is used to. She also wanted it to be made from simple healthy herbal ingredients and - she succeeded.

Despite the first success, she wasn't yet satisfied. She wanted the sausage to be available to everyone who wanted to taste it and for a part of the income to go to the promotion of plant-based nutrition - veganism, which she herself advocates. Animal Friends Croatia is responsible for continuing the story because it has found a manufacturer willing to help Anita's recipe get the stamp of professionalism and be available to everyone, regardless of diet. Annapurna, a domestic producer of vegan products - organic products based on soy and wheat, which has a European V-label on all its products, has agreed to introduce a new product according to the recipe of Anita and Animal Friends Croatia. Also, they will allocate one kuna from each product for the association's projects that promote veganism and sustainable living.

The final product was created during the isolation, with great effort and cooperation of Animal Friends Croatia's volunteers and the producer Annapurna. The product will be produced according to the highest quality standards and the first presentation will take place at the VegeFair, which will be held on Tuesday, June 23rd from 8 AM to 8 PM. There will be other tastings and promotions at the VegeFair and its offer will attract many citizens who will be able to eat ready-made food such as burgers and cakes at tables set under umbrellas.

At the stand of the Animal Friends Croatia, the Blue Cross association which cares for discarded cows, pigs, and sheep, will also present itself in order to educate about the importance of ethical living through direct help to animals. Vege Fair is a green oasis of diverse and luxurious vegan products that will, in addition to entertainment, provide its visitors with education on sustainable living, healthy food, and veganism. 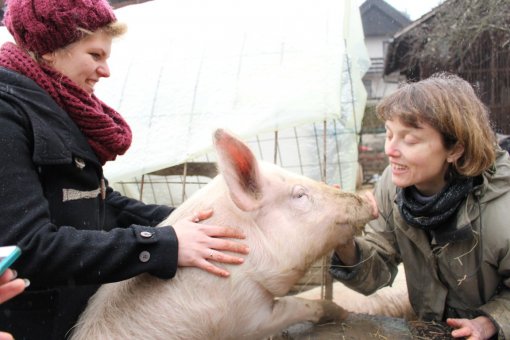