- Mathematician and philosopher Pythagoras in the 6th century BC. Christ: "Shall a man of my mind eat corpses?"

On the occasion of the World Vegetarian Day on October 1st, Animal Friends Croatia states that every year thousands of people opt for a more socially responsible lifestyle. They care about the environment and the climate, they want to end cruelty to animals and they want to live a healthier life and in harmony with nature.

Vegetarians do not eat animals, while the so-called pure vegetarians - vegans do not eat dairy products, eggs, and honey, or avoid all foods of animal origin. "Given that more than 70 billion animals are raised and slaughtered annually in the world for human consumption, World Vegetarian Day is a great opportunity to switch to a diet of plant-based foods. Absolutely everyone will benefit from it - animals, the environment, and people", says Animal Friends Croatia.
Experts say they confirm the health benefits of plant-based diets. The American Nutrition Association and Canadian nutritionists point out that well-planned vegan and other vegetarian diets are suitable for all stages of life, including pregnancy, lactation, childhood, and adolescence, and ensure health benefits in the prevention and the treatment of certain diseases. The effect of a plant-based diet on our health is so profound that it has been statistically proven to prolong human life by up to 13 years.

There are many benefits of plant nutrition related to environmental protection. For example, the British charity Vegfam estimates that a 10-hectare farm can support 60 people growing soybeans, 24 people growing wheat or 10 people growing corn, and only two people growing cows. Dutch scientists, on the other hand, predict that 2.7 billion hectares of land currently used for grazing could be freed up in the event of a global meat dump, with another 100 million hectares used to raise food for those animals.

Animal Friends Croatia reminds us that vegetarianism is not new. Although the Vegetarian Society was founded in 1847. in London, people have known and practiced plant-based diets since ancient times. As early as Pythagoras in the 6th century BC for ethical and health reasons. He thought, "As long as people kill animals, they will kill each other," and when asked about his diet, he replied, "Should a man of my mind eat corpses?" Leonardo da Vinci, who gave up eating meat at an early age, believed that the time would come when people would view the killing of animals with the same eyes as the killing of man: “We live from the death of others. We are walking tombs! He who does not value life did not even deserve it.”

Centuries later, Nikola Tesla believed that "every effort should be made to stop the reckless and cruel slaughter of animals, which can be disastrous for human morality." Albert Einstein believed that nothing would help human health or increase the chances of survival on Earth as much as the transition to a vegetarian diet: Our task must be to free ourselves by extending the circle of compassion to all living beings, and all nature and its beauty.”

World Vegetarian Day began to be celebrated worldwide on October 1st,1977. According to the latest data and estimates, more than 200,000 vegetarians live in Croatia. One study states that 86% of Croatian citizens support vegetarianism, while 29% of them believe that one day they could become vegetarians themselves.

The transition to a plant-based diet opens up endless possibilities for enjoying incredibly delicious dishes and thousands of new recipes. “Even if you’re not a vegetarian, you can celebrate World Vegetarian Day by exploring the world of vegan cuisine by preparing plant-based dishes or going to one of the vegan restaurants, watching movies and reading vegan-themed books, or visiting a farm animal shelter. Vegan food is available and suitable for everyone", concludes Animal Friends Croatia. 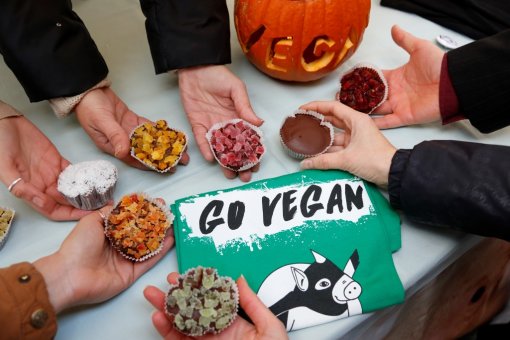