Message from Tarik Filipović for 20 years of the campaign „Family to the seaside, and a dog to the street?!”

Tarik Filipović, a favorite television face, is this year’s representative of the campaign “Family to the sea, and a dog to the street?!” by which the Animal Friends Croatia has been educating for 20 years in a row about responsible care for dogs and cats. In front of the lens of photographer Domagoj Kunić, who himself adopted a dog rescued from the earthquake, the well-known actor and a TV presenter posed with Melinda and Smoki, irresistible dogs from the Shelter for Neglected Animals of the City of Zagreb in Dumovec. The message in the visuals „Spay, do not philosophize! Because abandoned animals do not fall from the sky.” indicates the importance of castration in preventing the abandonment of unwanted puppies and kittens.

The presentation of the campaign will be held on Friday, June 24th, 2022 at 12 o’clock in the popular Zagreb Cat Caffe (Kušlanova 6). There, Tarik, with visuals with Melinda and Smoki, will be surrounded by 14 cats adopted from the street or from an asylum in this only cat cafe in Croatia, from which they announce: „On a daily basis we educate guests about the importance of castration, and that being before one litter, as well as about proper cat care. That is why we are happy to host Tarik Filipović for the purpose of presenting a campaign with which we share the same goal – responsible behavior and stopping the abandonment of cats and dogs because of vacations.”

During the photo shoot, Tarik immediately “clicked” with the extremely good and calm young dogs from the Shelter of Neglected Animals of the City of Zagreb in Dumovec, who indulged in his cuddling. White Melinda is a one-year-old Swiss Shepherd crossbreed weighing approximately 20 kg, who is looking for an active family, Smoki is a ten-month-old yellow terrier crossbreed, who walks with difficulty and just wants to be carried and cuddled, so a quiet family would suit him. „Whoever adopts these dogs, as well as any others waiting in shelters across Croatia, will obtain a wonderful family member”, Tarik pointed out, calling for the adoption of abandoned animals.

As a reminder, he pointed out that abandoned animals do not abandon themselves, but that this is a reckless behavior of individuals, often ending tragically: „I am horrified there are still people who, especially before the holidays, leave animals on the street, in the woods or even drown them. I appeal to everyone who takes care of animals to castrate them and not abandon them. It is really difficult to find a home for just one puppy or kitten, let alone seeking a solution each year for the new animals being born into the world.”

This is confirmed by Dr. med. vet. Svjetlana Prodanović, coordinator of Animal Friends Croatia Animal Protection Network Project: „Dogs and cats are highly reproductive species whose number can increase tenfold in just a few years. Castration is a necessary tool for the fight against their abandonment, especially taking into consideration that the shelters are overcrowded and the cost of animal care is extremely high. Therefore, we thank Tarik FIlipović for drawing attention to the importance of prevention of abandonment of dogs and cats.”

Animal Friends Croatia state that, motivated by numerous cases of severe consequences of abandoning animals, they have launched a petition and an initiative to sanction abandonment of animals as a criminal offense: “We appeal to all not to abandon animals prior to leaving for vacation, but to adopt a dog or a cat if they can meet the conditions. Currently, the situation is alarming with more than 200 dogs from Dubrovnik, which need to be adopted urgently, with all their details available at www.adopt-zarkovica.eu.”

Animals Friends Croatia also thanks all who contributed by volunteering for the realization of the visual „Spay, do not philosophize! Because abandoned animals do not fall from the sky.”; photographer Domagoj Kunić, make-up artist Kristina Hošnjak; the Shelter for Abandoned Animals of the City of Zagreb in Dumovec who take care of Melinda and Smoki, and the Omnibus Studio and Cat Caffe. 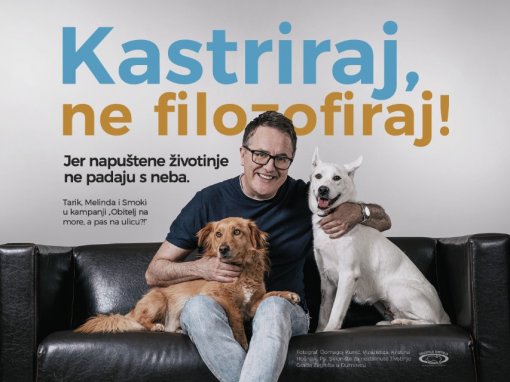