We all know that for health and beauty what is on the plate is important. Summer, with an abundance of fresh fruit and vegetables on the menu, is ideal for introducing healthier eating habits. Animal Friends Croatia at www.prijatelji-zivotinja.hr provide the recipes for tasty and healthy dishes that will help us to enjoy seasonal foods, cool down from the heat and feel extremely well as we are doing something good not only for our health but also for the animals and the planet.

From the cookbook of Animal Friends Croatia we present several recipes of light summer dishes, from salty to sweet, that are prepared quickly and are also disappearing even quicker.

Preparation: Cut the eggplants into slices, fry on a pan in a spoonful of oil (or bake halved eggplants in the oven) and cool down. Finely chop the eggplants with a blender and mix in crushed garlic, parsley, salt and pepper. Slowly add the remaining olive oil and the lemon juice until you get a creamy mixture. Serve the spread with toasted bread.

Preparation: Chop eggplants, salt them and mix them well and let them stand for half an hour, then drain them well. Chop the potatoes, zucchini and onions and crush the garlic. Fry the onion in a pot and when wilted, add garlic. Add the vegetables and the spices. Simmer briefly and then add wine, tomato concentrate and water. Cook for about 30 minutes with occasional shaking of the pot.

Preparation: In a large frying pan with oil, add onions, garlic and bay leaves. Stir until onions soften. Dice the eggplant into small cubes. Add into the pan and stir occasionally until eggplant softened approximately 8 minutes. Split the zucchini lengthwise and cut it into slices. Cut the pepper into strips. Roughly chop the tomato. Stir the zucchini, pepper, tomatoes and salt into the pan with the eggplant and cook on medium heat for 5 to 7 minutes or until vegetables soften. Stir occasionally. Add the pureed tomatoes in the end. Add in the spices and pepper as per taste.

Ingredients: 6 large peppers, 250 g cooked beans (or 1 can), 1 small onion, 2 carrots, 4 spoons of olive oil, 2 garlic cloves, half a cup of pureed tomato, 1 spoon of soy sauce, half a bunch of parsley, salt and pepper as desired

Preparation: Fry the onion in oil, add grated carrot, and garlic, then the beans, salt and pepper and at the end the parsley. Cut the upper part of the peppers, remove the seeds, stuff them with the prepared filling and close with the upper pepper part. Place the stuffed peppers in an oiled fireproof dish, pour over any excess mixture, tomato sauce and garnish with soy cream. Bake for about half an hour at 180 °C. Serve with rice or some other cereal

Preparation: Wash eggplants, cut into slices of about 2 cm, salt well and leave for about half an hour. Squeeze out the excess water from them, chop them into dice and cover with garlic. Briefly cook soy bits in salted water, drain, add soy sauce and garlic. Rinse the mushrooms and cut them into halves. Rince the zucchini and dice them. Wash the peppers and cut them into squares. Peel the onions and cut them into cubes. On wooden skewers put pieces of vegetables, soy and mushrooms. Salt and pepper all and then oil them. Bake on the grill or in the oven (arrange in two layers in a dish). When baked, sprinkle with a little more oil (and soy sauce to taste).

Preparation: Cook the chickpeas, but do not salt the water. Cool chickpeas in the water. For crusts, beat the chickpea's water (aquafaba) with sugar that is to be added gradually. When firm, add flour mixed with soda and baking powder. Then slowly mix in oil spoon by spoon and add vinegar at the end. Bake at 180 °C for about 30 min. The mixture is enough for a large baking sheet or two round crusts can be baked (one by one), 28 – 30 cm in diameter. Cut the biscuit when it is cooled down. If a square biscuit is made, cut two or three times (if cut three times, the cake will be higher). Put the ingredients for the first cream into a bowl and beat with a mixer, which will be completed in several minutes. Then in the other whip the cream. Place the first cream with pudding, then a layer of fruit and then whipped cream, then repeat; biscuit, yellow cream, fruit, whipped cream.

Preparation: Place diced watermelon into the blender and mix for approximately 20 seconds until a thick mixture is obtained. Then add vanilla ice cream scoops and mix for additional 20 seconds or so. In the end, leave it in the fridge and add several ice cubes.

Preparation: Wash the blackberries and blueberries, and cut bananas into slices. Add vanilla sugar and blend in an electric chopper. Add oat milk to the mixture and blend into a uniform mixture. Place into a suitable container for freezing for 4 – 5 hours. With an ice cream scooper or a spoon mold them into balls, sprinkle them with almond leaves and serve. Before forming the balls, soak the scooper or spoon in warm water. 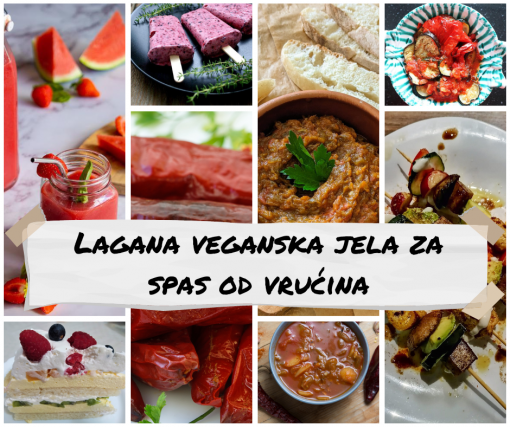