Animal Friends is announcing and inviting you to a lecture

Himalayan yogi Maharishi Swami Dev Murti will hold a lecture on June 26 at 5:30 P.M. at the Cultural Informative Center in Preradoviceva 5 in Zagreb.

Maharishi Swami Dev Murti, 105 year old, is a patron of vegetarian nutrition, of what he will, seen from many aspects, talk more in detail at his lecture.

He began practicing yoga when he was three years old. His parents were yoga teachers and his family studied for years non-religious yoga in a yoga school at the foothills of Himalayas. Great masters of Himalayan yoga would stop there and would teach Swami Dev Murti as a child of 5 years and take him to the caves of Himalayas, teaching him secrets of yoga studies. At the age of 25 Maharishi Swami Dev Murti had mastered over 50 different yoga systems, was learning sanskrt and Vedas and became a doctor of Ajurveda, naturopathy and other systems of natural medical treatments. After that he spent a longer of period of time alone, living in a cave on the snowpeaks of Himalaya.

In his many lectures he emphasizes the importance of regular plant-based diet. 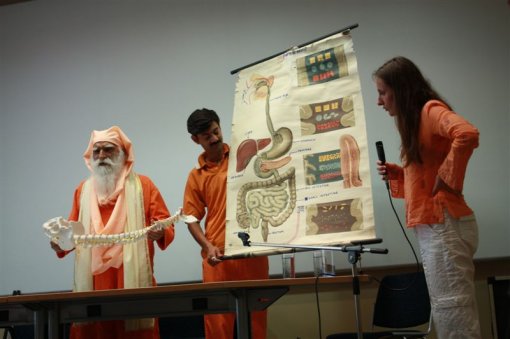