Now is it bihovely thyng to telle whiche been the sevene deedly synnes, this is to seyn, chiefaynes of synnes. Alle they renne in o lees, but in diverse manneres. Now been they cleped chieftaynes, for as muche as they been chief and spryng of alle othere synnes. - Geoffrey Chaucer, The Canterbury Tales

Today is the eve of the great slaughter of the innocent.

Tomorrow is April 12th when the rapacious rifles of the Newfoundland sealers begin violently cracking and rumbling and disturbing the peace and serenity of the harp seal nurseries. Tomorrow Cocytus, the ninth circle of hell, will manifest itself upon the heaving ice floes off the grayish cold coast of Northern Newfoundland and Labrador.

From out of the ice-dusted mists will emerge the foreboding spectre of dark ships and men dressed in deathly black.

Tomorrow over two hundred thousand young and innocent seal pups will begin to die in horrific agonizing pain as lethal bullets tear with murderous savage fury through their small and fragile bodies, shredding organs and arteries, spewing their hot innocent blood into the frigid Labrador Sea and splattering it upon the pristine ice. Primitively vicious clubs will shatter soft tiny skulls as sealers dressed in black and besmeared with slimy blood, march arrogantly across the ice, kicking pups in the face, tearing the living skin off of small throbbing convulsing bodies, and transforming the home of the ice lovers from Greenland into a dark, chaotic cesspool of evil.

This is a vicious and tedious battle - this epic struggle to end the horrific slaughter of seal pups in Eastern Canada. It is a classic struggle between evil and good. A person does not need to be religious to know that defending life from death is innately good, and inflicting death and abject cruelty on such a massive scale, and especially to defenseless young sentient beings, is the very definition of evil.

These shameless men who inflict such gross destruction upon the moving ice and the deceitful politicians and gullible people who blindly support them are biblically evil. They are homo arrogantus mimicking their own perception of God as they smash in skulls, slit open young bellies, and violently penetrate creatures that have done them no harm.

These are men who kill not for food, not for survival, but for contemptuous vanity. They strip away life to artificially adorn human bodies with pelts that are far more beautiful in death than the living skin of the creatures wearing them.

They crusade against the laws of nature as they harness cold and sterile technology to destroy life efficiently, thoughtlessly, insensitively, and ignorantly.

These are men, who in their greed have overfished the seas, looting the waters of life as they plunder the fishes from the deep to convert into lucre. Now they seek vengeance upon their chosen scapegoat - the innocent baby seals.

Their stubborn pride lies like a dark veil upon their eyes, preventing them from seeing the iniquitous consequences of their greed, their rage, and their lust for the blood of the innocent.

These are men, who in their anger, preach a harsh hatred of the compassionate, and belittle the kindness of those who care for the lives of the seals.

Like ravenous demons conscripted by Lucifer, these heartless men, these seal killers, are never satisfied as they ravage the living bosom of the sea of life in a gluttonous frenzy of profiteering. They act like all life belongs to them, free for the taking, at their will. Armoured by their anthropocentric philosophy of human domination, all killing is sanctioned and all morality is simply bartered away for denial. They are the takers and they give nothing back.

Last year, I saw them pass us by, a convoy of wicked ignorance, as men stood on the blood and gore besmeared decks of boats being escorted through the ice by the powerful scarlet ships of the Canadian government. Like spoiled children, they hungrily followed the ice-breaker as it led them to new nurseries to destroy more helpless seal babies to vent their depraved savageness upon.

As they passed, they hooted like lunatics and made obscene gestures they thought would upset us. We were unpleasantly surprised when one sealer dropped his blood-stained pants and vented his lust at the sight of our female crew. It was one of the most truly bizarre sights that I had ever witnessed, a full-grown man, his pants around his ankles, standing in gore, pulling and jerking his penis as he wagged his tongue and drooled at the young women on our deck. And rather than look the fool to his comrades they applauded his fetish like it was normal behaviour. Perhaps in the outports of Newfoundland it is.

There was a time only a few short years ago when the clergy would see the sealing ships off with prayers that their decks would run red with blood. It always struck me as odd that men of the cloth would send killers off to destroy "kotik," the Inuit word for seal that Labradorean missionary Sir Wilfred Grenfell once coined for the whitecoated pups in a linguistic effort to convey the meaning of the 'Lamb of God' to a people who had never seen sheep.

It is odder still that a large powerful Canadian Coast Guard ice-breaker bearing the name of Sir Wilfred Grenfell now escorts the vile butchers through the floes to silence the lambs of the ice, and as it does, the ship itself crushes seal pups beneath its keel as Grenfell's name reflects the ensanguined death throes of screaming infants ground to a bloody pulp in the ice below.

Malevolence is given free rein when harnessed to power and with the absolution granted by the Canadian Parliament, the sealers have turned the floes into killing grounds where none may bear witness to the horrors sanctified by law without permission. The law has legitimized shame and hoisted the flags of pride over the domain of terror inflicted on the ice.

Pride, the venal sin from which all other sins arise, is the driving malignant force behind the massive massacre of the innocents. The sealers vainly stride across the ice like it is their realm of righteousness, where the slaughter has become ritualistic and the urge to kill pulses through their veins like some cancerous demonic perversion that robs them of mercy, respect, and love.

The slaughter of the seals is an annual baptism of blood, where the killers, according to Magdalen Island sealer Pol Chantraine, often drink the living blood from the heart of their first victim and paint their faces with the hot, salty, virgin liquid of life, mumbling semi-paganistic chants of becoming one with the ice as blood drips down and congeals like grease onto their silver and gold crucifixes.

It is this perversion that they proudly indulge and defend.

Deviant demons of death slandering angels of life and compassion.

Government control is cheaply given because it can be had by the devious by giving nothing and exploiting the sin of Pride towards achieving political deviltry. Men of wealth like John Crosbie, Danny Williams, and Bill Barry can garner votes and profits from the gullibility of those who use and abuse them for their own self-serving ends.

Mohandas Karamachand Gandhi, one of the most influential paragons of kindness in the history of social and political activism, once wrote that you cannot have commerce without morality.

I was led to oppose the slaughter of seals as a young boy in New Brunswick by none other that Albert Swietzer, the honourary president of the Kindness Club, an organization established by Aida Flemming, the wife of the former Conservative Premier of New Brunswick, Sir Hugh John Flemming.

It was there that I learned to live in accordance with what some refer to as the heavenly virtues, i.e. the four Cardinal virtues of Prudence, Temperance, Courage, and Justice with the theological virtues of Faith, Hope, and Charity.

We have faith and we have hope that the killing of the seals can be abolished and it is the charity of those who care for the seals that will make this possible. We have the courage to go to the ice, to take to the airwaves and to debate and confront the killers of baby seals. Our approach is prudent, temperate, and motivated by a desire to achieve justice for the seals.

Our temperance is apparent in the restraint we must exercise to not answer violence with violence, and thus we have had to take the blows, endure the beatings, and suffer incarceration without reprisal or justice.

We who defend the seals are not like those who destroy them. We practice non-violence and yet they use the very fact of refusal to eat meat and our own kindness as barbs to goad and humiliate us as if they think to shame us with our own virtues.

These narcistic necrovores ridicule veganism as they gnaw and devour long-dead decaying corpses of sentient creatures, consuming carrion like base scavengers as they proudly compare their butchery to the slaughter of the lambs and the battering of chickens.

Those who defend the seals, like those who defend other species, who defend habitats, who defend children, and who champion the innocent, the meek, and the peaceful are gentle warriors representing the virtue of goodness over the foul and festering vice of evil.

Seal defenders have the moral high ground because we do not inflict or advocate violence. We do not contribute to suffering and death, and we contribute our bodies, our resources, and our time to making this a better world for all of life.

This planet does not belong to those who destroy it. They are the greedy who steal from their children. The planet belongs to those who live, respect and honour, protect and defend life.

Over the next week, the pathetic little corpses whose large eyes so recently reflected the wonder of the living world will once again litter vast expanses of ice, and spirals of blood will radiate out from the killing boats. The clean virgin air will stink of diesel fumes, stale beer, tobacco, and human sweat. As these foul smells drift across and defile the ice, it will send a ripple of fear across the face of the floes, touching each and every seal with the message that the pristine and pure world of ice, the nursery floes of the harp seals is being invaded once again by a monstrous foe. Crusaders doused in the stench of viciousness will begin once again, their annual rampage of self-indulgence, caring nothing for their victims, and dismissing those who dare to question their deceitful and cruel displays of provincial pride. The seal defenders have one objective – to stop the killing, to silence the thud of the clubs and the crack of the rifles – to defend innocence and to protect life.

For the sake of all those sentient beings who will be born upon this Earth for years to come, we must prevail. We can prevail and we will prevail.

This Article may be freely distributed and/or published. 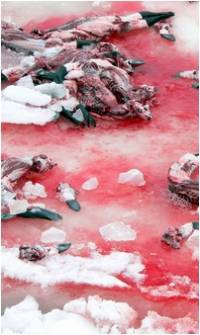