The sad ending of the helpless Nero: Ban on dog-chaining and reform of veterinary inspections necessary

Two days ago, only three hours after Animal Friends Croatia published a story on the dog named Nero from Krapina, chained and freezing with a painful tumour on his anus, after the veterinary inspection had established these animal keeping conditions as adequate, the State Inspectorate informed the Organization that the dog owner had the animal euthanised. The sad ending of the hapless dog, another example brought up by Animal Friends Croatia indicating that veterinary inspections do not favour animals, led to unanimous condemnation of dog-chaining across social networks!

Responding to the latest detailed complaint by Animal Friends Croatia on the constant chaining of Nero and denial of adequate veterinary care, the veterinary inspection, as expected, reiterated that “they had not established any unacceptable dog treatment”. “Over the last year, we have filed a number of reports to the veterinary inspection requesting that the sick dog be removed from the chain with which he had been restrained for over 12 years, supposedly guarding a shabby stable, and that adequate medical treatment be provided”, Animal Friends Croatia explain.

Contesting the latest report by the veterinary inspection, Animal Friends Croatia state that, over a period of at least a year, Nero suffered pain, which was not only evident from the tumour growth on his anus, bloody wounds on his ears caused by flees, and scratched hairs on his tail, but also from his visibly thinner appearance and refusal to take food. A well-meaning witness visited him, sought vet care, and offered Nero’s owner financial support and transport to the vet clinic, all of which were refused by the owner.

They add that a utility worker warned them about Nero’s abuse, having himself demanded from the owner to remove rotten beams and roof tiles hanging over the dog and threatening to collapse, as well as to provide the dog with a house, protect him from the elements and secure vet care. Both witnesses and vets pointed out that the dog was suffering. Only the local veterinary inspector responded to all complaints by stating that Nero did not suffer any pain, nor did she notice any neglect by the owner “with regards to his health, accommodation and care”.

“Animals can be euthanised only if they suffer strong and irremediable pain. Why was Nero euthanised if the inspector had informed us only a month before his death that the tumour was not causing him any pain? She pointed out that the owner gave him painkillers while he supposedly didn’t suffer any pain. However, the vets told us that the owner had never brought him over to the clinic for a check-up or diagnosis”, Animal Friends Croatia state.

Pointing out the contradictions, Animal Friends Croatia are justified in asking: “Does it not make sense to conclude that Nero suffered from pain due to the tumour from the very beginning, a pain which got worse as the tumour grew? How is it possible that a large tumour on his anus did not cause pain every time he tried to sit down, especially on a frozen or wet muddy ground? Shouldn’t a severely sick dog have been put in a warm place instead of having been left in pain while chained in cold winter temperatures? Does this mean that veterinary inspectors do not consider holding a chained dog in pain at below-zero temperatures animal neglect?”

The organization emphasises that they are very sad that, even in Nero’s case, the veterinary inspection reacted notoriously by protecting the interests of owners who neglect or abuse the animal, while considering dog-chaining as their safeguarding. “Practice shows that individuals who neglect animals are encouraged by such favourable practices by the inspection to get another animal again and treat it the same way knowing they wouldn’t be penalised for it. Citizens expect genuine efforts on the part of the veterinary inspection to help animals, and there are examples showing this is very much possible”, Animal Friends Croatia believe.

They demand the State Inspectorate and the municipal district attorney decide the misdemeanour and criminal liability for both the dog owner and the veterinary inspector. In their reports, they state that Nero lived in disgusting conditions that were a danger to his life and health, and that the (mal)treatment by the owner and the inspector prolonged his suffering and increased his pain, both due to physical pain caused by the tumour and the psychological suffering caused by chaining day and night in the cold, and far from human company. 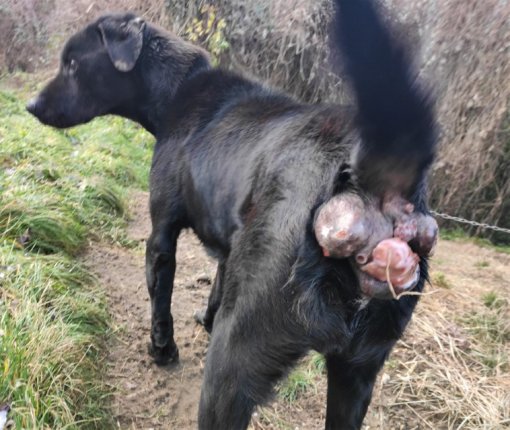