PETA's "Holocaust on Your Plate" European tour comes to Zagreb

Zagreb - PETA's controversial "Holocaust on Your Plate" project is coming to Zagreb. The display, which consists of eight 6-square-meter panels, each showing photos of factory-farm and slaughterhouse scenes side by side with photos from Nazi death camps, graphically depicts the point made by Jewish writer and Nobel laureate Isaac Bashevis Singer, who wrote, "In relation to animals, all people are Nazis."

The display, coordinated by PETA Campaign Coordinator Matt Prescott, consists of eight 6-square-meter panels, each showing photos of factory farm and slaughterhouse scenes side by side with photos from Nazi death camps.

"The exhibit will make its European debut on March 18 in Stuttgart and before it complete its tour on April 8 in Amsterdam it will also visit Zürich, Milan, Zagreb, Budapest, Vienna, Bratislava, Prague, Warsaw, Stockholm, and Copenhagen."

PETA wants to stimulate people to contemplate how the victimization of Jews, Gypsies, homosexuals, and others characterized as "life unworthy of life" during the Holocaust parallels the way that modern society abuses and justifies the slaughter of animals. Just as the Nazis tried to "dehumanize" Jews by forcing them to live in filthy, crowded conditions, tearing children away from their mothers, and killing them in assembly-line fashion, animals on today's factory farms are stripped of all that is enjoyable and natural to them and treated as nothing more than meat-, egg-, and milk-making "machines." Laying hens are crammed on top of each other in small wire cages that do not afford them even enough room to lie down and have their beaks burned off with a hot blade to keep them from pecking each other for space. Pigs are kept on barren, sore-inducing concrete-floored stalls and are castrated and have their tails cut off without painkillers. Calves raised for veal are torn from their mothers within hours of birth and chained in tiny, dark stalls where their joints swell from trying to balance on slippery, waste-covered slats.

"The very same mindset that made the Holocaust possible - that we can do anything we want to those we decide are 'different' or 'inferior' - is what allows us to commit atrocities against animals every single day," says Matt Prescott, members of whose family were murdered by the Nazis. "We are asking people to bring understanding into their hearts and onto their tables by embracing a nonviolent, vegan diet that respects other forms of life."

For more information about PETA's Holocaust on Your Plate campaign and to view the display, please visit MasovnoUbijanje.com, a new website made specifically for the Croatian public.

Animal Friends is sorry to see the accusations and assaults made by the Croatian media after the ending of the exhibition "Holocaust on your plate," which took place in Zagreb, on March 24, 2004, and was organized in association with PETA (People for the Ethical Treatment of Animals), world's biggest organization for animal rights. The installation contained of eight panels on which disturbing photographs from the industrial farms and slaughterhouses were shown next to the photographs from the Nazi concentration camps. The exhibition was shown across the USA last year and is now on its European tour which will go through 11 cities until April 8.

The similarity between the mass slaughters earlier done on people, and today on animals was indeed, first noticed by Yiddish intellectuals, such as a writer and Nobel prize winner, Isaac Bashevis Singer ("In relation to them (animals), all people are Nazis; for the animals it is an eternal Treblinka.") and a philosopher Theodor Adorno ("Auschwitz begins wherever someone looks at a slaughterhouse and thinks: they're only animals.").

The intention of the exhibition was not in any way minimization or trivialization of the horrors through which the Jews, Gypsies, homosexuals and other victims of Nazism went, but to emphasize the trivialization of animal slaughtering. The intention is to make people see that the victimization of people in the Nazi regime is equivalent to the way the modern society treats animals and justifies their slaughter. The exhibition wants to say that the industrialized mass killing f the innocent did not end with the second world War but still goes on in a systematic serial killing and exploitation of animals.

Animal Friends and similar animal rights organizations cannot stay indifferent and ignore the suffering of animals in the mass farm raising. The intensity of the suffering and the cruelty of the procedures and methods used in raising and slaughtering are the indicator for the analogy with the Nazi concentration camps. Same as the Nazis tried to "dehumanize" the Jews by forcing them to live in dirty, overcrowded conditions, by separating children from their mothers and killing them on "assembly lines," the modern society deprives animals of their natural rights and treats them like machines for production of meat, eggs and milk. For the maximization of profit, more than 40 billion animals a year are raised in horrible conditions, deprived of basic needs, go through a lot of pain and are crippled, so that they could become food after brutal killing.

The exhibition wants to show that the ones who kill have similar ways of thinking and methods, no matter who the victims are - people or animals. The victims are not being equalized - only the same type of crime is being pointed out. The exhibition makes us learn the lessons of holocaust so that we could expand our circle of compassion and apply our moral principles to other species as well. Matt Prescott, coordinator of the campaign, who is Jewish and whose family members were killed by Nazis, says that the same way of thinking that had made holocaust happen (that is based on being able to do whatever we want to the ones we decide are "different" or "inferior") is letting us do crimes on animals on a daily basis. Unlike other victims of oppression, whose voices can be silenced, animals don't have the right of vote, and therefore we don't have other choice than reaching for the most extreme examples of suffering of people to inform the public about the horrors of suffering of animals.

The goal of this exhibition is not to emphasize the status of one group of victims on account of others, but to demonstrate that all forms of abuse should be thrown away. The part that should really be offensive to everyone who sees the exhibition is the heartless inferiority about the suffering and killing of billions of animals a year. Same as people, animals also crave for freedom, they want to live their lives in their own way, they suffer, they are scared and fee the loss of dignity. The exhibition wants to warn people about the ignoring the every day suffering of animals that can be stopped by making a transfer to vegetarian nutrition.

As an organization whose goal is to educate and inform the public, we would appreciate it if the media and interested organizations as well as individuals would get in touch with us in order to get the information and explanations, before they judge our actions in which we are trying to show the exploitation of animals and lack of compassion towards them. 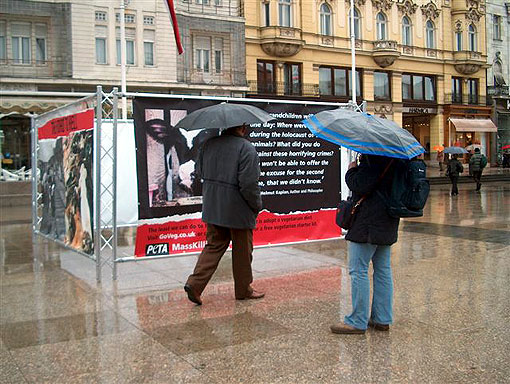