After last year's actions, like burning up fur coats on the Petar Preradovic Square, funeral processions to fur coats in the center of Zagreb, and other projections, lectures and fashion shows of non-cruel materials kept on the bus station in Zagreb, animal friends continue with the campaign against killing animals for fur.

This year we will organize series of actions, and it all starts with an extensive advertising campaign of billboards, info-places, flyers, projections, lectures, posting public places, etc.

Along with the billboards in Zagreb and Split, in about a hundred buses and trams in Zagreb posters were pasted presenting Sophie Ellis Bextor holding a skinned fox with the following text beneath "This is the rest of your fur coat." Like Pamela Anderson, Sash and Christina Appelgate, Sophie also stood up in defense of animals using her popularity to help.

Stella McCartney, famous fashion designer and Paul and Linda McCartney's daughter, made the photo. Paul and Linda are also activists for animal rights. The poster was designed by the American organization PETA that includes over eight hundred thousand members all over the world.

Sophie Ellis Bextor got famous with the hit "Murder on the Dance Floor" and this year was nominated for best dance on the European MTV awards. She joined PETA with the intention of helping animals. "I'm part of the generation that grew up with the 'We'd Rather Go Naked than Wear Fur' Campaign in the ... early 90s and it's something that really struck a chord with me, and to me it felt a very natural thing to do," says 22-year-old Sophie, "that you'd obviously be on the side of the animals when it came to fur." She agrees that animals shouldn't be fashion victims. "I think it's a really pathetic thing to do, especially when there are so many alternatives," she notes.

It's sad and pathetic that millions of animals like foxes, raccoons, squirrels, chinchillas, beavers, and other are bread, or caught in the wild just so they can have their skin ripped off and fur coats, hats, collars, and other fur decorations made of it. Before the fur is ripped of, breaking their necks, injecting poison in their hearts, asphyxiating (gas) or electric shocks unmercifully kills the animals.

In the wild animals are caught in very cruel traps in which they wait to be slaughtered. Because of the enormous pain animals very often bite off their own legs to run away. Birds, dogs, cats, and other domestic animals also get caught in traps.

In spite the dreadful information, every winter there are more and more fur coats, and probably there will also be given as Christmas presents. Although the fur industry is gradually declining, still the killing won't stop and again millions of animals suffer, die and become a part of someone's coat, because some people can't face the facts that we've gone out of Stone Age long time ago.

The last trace of fur industry is what we see on the streets: fur collars, details on sleeves, and unnecessary details on "usual" coats and jackets new kinds of fur coats. Unfortunately there are a lot of offers and commercials, so people don't think and participate in the most stupid crime of them all to animals - in killing because of fashion. 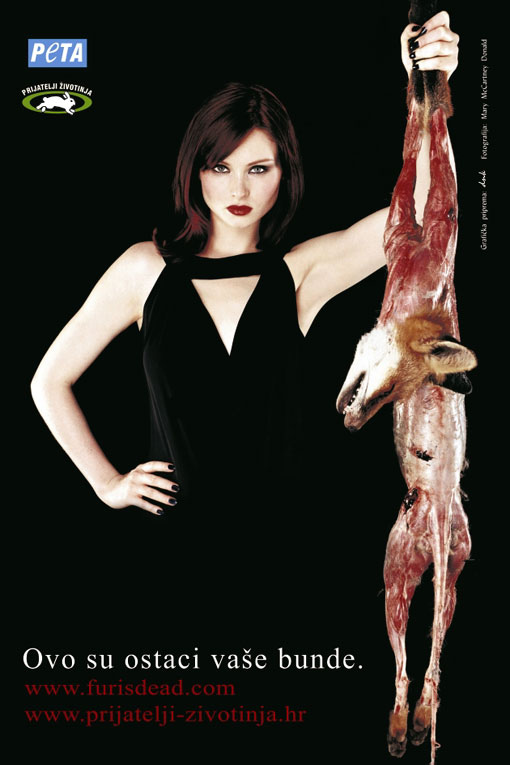