- Naked Bear as the first athlete in Animal Friends' campaign!

After activists and supporters of Animal Friends gave their support to the Ice Hockey Club Medvescak Zagreb during numerous home games of the regional league EBEL against Slovenian, Hungarian and Austrian teams by unfolding a large several meters long banner reading "ANIMAL FRIENDS ADORE THE BEARS," the Bears payed them back for their support for the "For Croatia without Fur" campaign – by undressing their representative!

Luka Novosel, the 26-year-old defender of Medvescak, undressed exclusively for this occasion for the new Animal Friends' campaign in order to draw attention and point out the suffering of animals for their fur. After model and journalist Fani Stipkovic and singer Luka Nizetic, the hockey player Luka Novosel thus joined the 'For Croatia without Fur' campaign and became the first athlete in Croatia who went naked for animals. It should be noted that in the international version of this campaign organized by PETA only a few of world athletes took part.

No matter how much the fashion industry portrays fur as trendy, comfortable and sexy, fur isn't that. The naked truth about abused animals is being suppressed. Every year more than 75 million animals suffer and die because of the fur trade. The suffering of animals raised on fur farms is inconceivable. After spending their miserable lives in tiny, filthy cages, they are killed by gassing, electrocution, strangulation, poisoning, necks fracture... Some of them won't even die, and thus are skinned alive.

Animals that are hunted for their fur don't get off any better. Their death isn't quick, their suffering isn't short and instantenuous. Trapped animals freeze, or burn under a hot sun, and are helpless when attacked by predators. Survivors are stomped, strangled, drowned or beat up to death by the trappers to avoid staining their fur.

Although hockey players have the reputation of being machos who do not think twice before going rough in a game, the Bears showed that they could be heroes even when they are showing their sensible and compassionate side. When joining this campaign, Luka Novosel said: "I joined this campaing because I love animals and if there is anything I can do for them, the least I can do is to get my picture taken and help animal protection. Fur should be where it belongs. On animals!"

The shooting for the billboards and postcards with Luka's autograph for the campaign "For Croatia without Fur 2009/2010" took place in the studio FIRMA ZA SVE. Viktor Drago and Goran Matijasec are the authors of the photograph while Viktor Drago is responsible for the visual of the whole campaign. Graphic design was made by Zale.

Billboards with the slogan "REAL BEARS DON'T WEAR SOMEBODY ELSE'S FUR" will appear on the streets of Zagreb in the middle of January this year, while the fastest visitors of the Medvescak games will get postcards with the campaign's visual as a gift.

The campaign "REAL BEARS DON'T WEAR SOMEBODY ELSE'S FUR" has been realized in collaboration with IHC Medvescak Zagreb, while Cro A Porter, National Foundation for Civil Society Development, the City Office for Agriculture and Forestry, Iskon, Vectordesign, Arto, and Zale gave their additional support to the campaign. 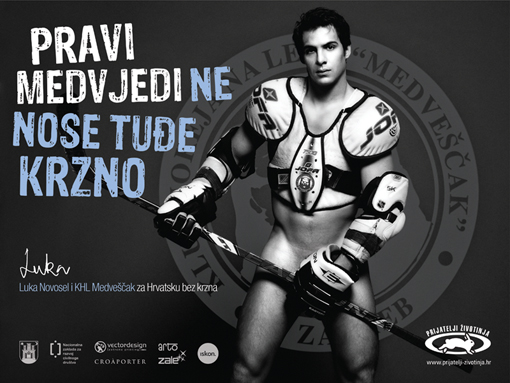 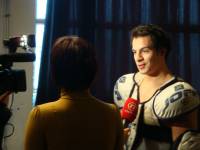