- Public action on Trg bana Jelacica, which includes dogs as well, warns against the heartless cruelty

Studies carried out in countries across Europe clearly show that more and more citizens are against the exploitation of animals for fur, resulting in legal prohibitions of related breeding practices. States such as Croatia, Great Britain, the Netherlands, Austria, Germany, Bosnia and Herzegovina, Switzerland and Slovenia have already banned it, and organizations and individuals who work for animal rights and protection persist in the campaign for the prohibition in other countries as well. Thus, for example, in the Walloon parliament in Belgium, the prohibition was adopted unanimously.

In 2007, Croatia introduced an Act which prohibits the breeding of animals for fur, with a transitional period of ten years. While Europe registers the increase in the number of states which do not allow the breeding of animals, fur is still imported and sold as a part of clothing items, shoes, accessories and related products. Even though the logical step would be to prohibit the sale of such items, it is of key importance to also inform the buyers of the products they buy.

Therefore, Animal Friends and dogs, who will symbolically wear bloody bandages, want to inform the citizens and call for a careful selection while buying, so as not to wear a piece of fur of a skinned dog, cat or any other animal, and thus a piece of their unimaginable pain and suffering. Public gathering with dogs and the performance with banners will take place on Saturday, February 21, 2015 on Trg bana Jelacica in Zagreb.

Animal Friends Croatia published a shocking video about fur industry on: www.prijatelji-zivotinja.hr and on their YouTube channel: www.youtube.com/afcroatia

The fur industry is responsible for deaths of over fifty million animals. Fox, raccoons, rabbits, chinchillas, raccoon dogs, squirrels, minks, cats and dogs are imprisoned in small cages their whole lives, being tortured and killed in extremely brutal ways. Some of them, like raccoon dogs, are being skinned alive, completely conscious and in agony of pain and fear.

Nowadays, most individuals find it completely unnecessary and even distasteful to wear a coat or a jacket made of animal fur. There is no practical or aesthetic reason which can justify that, while there are various more ecologically and ethically acceptable alternatives. Fur produced from non-animal materials is visually attractive and warm, it considerably reduces pollution, and by buying it one supports the sympathetic choice not saturated with suffering and killing.

While seldom anyone would consciously and intentionally buy a jacket or a coat made of animal fur, many tend to forget about a great number of details and accessories for which fur is widely used. Fur trims on the hoods of jackets, gloves, boots and similar items largely contribute to the profit of fur industry, behind which there is an equal amount of suffering. Regardless of whether they end up as jackets, or even false lashes made of mink, animals will suffer equally painful deaths.

Because a little bit of fur hurts equally, all the compassionate citizens are invited to support the action and join in the condemnation of killing animals for their fur. More information and the list of stores that do not sell fur can be found on links. 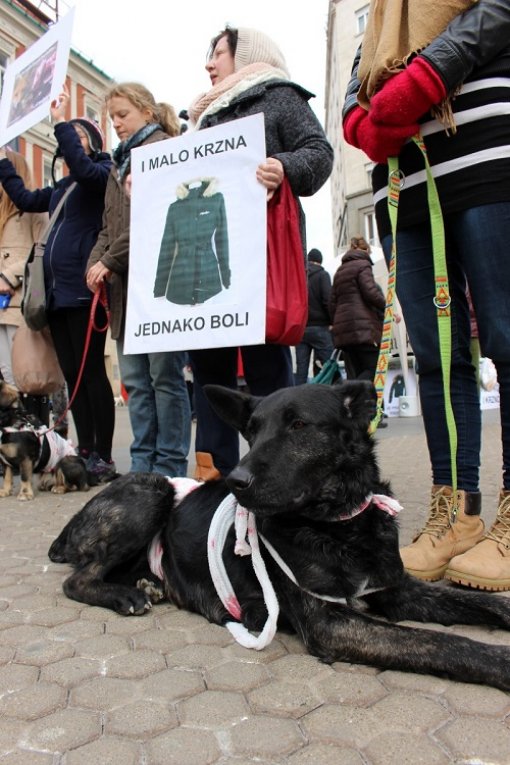